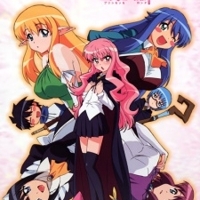 Following Saito’s heroic actions in the War with Albion in season two, Saito & Louise return to Tristain, only to have the runes which bind Saito & Louise disappear. Saito & Louise struggle with a relationship no longer defined as Master & Familiar, as they search for an Elf who has the power to restore the dead to life, and may hold the key to understanding Saito’s loss of the Gandalfr’s power.