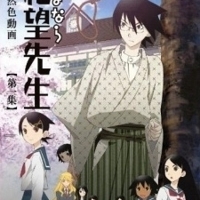 Sayonara Zetsubou Sensei is a slice-of-life comedy featuring a high school teacher, Itoshiki Nozomu. Despite being a teacher, he tends to get negative about everything. A man so pessimistic that even the simplest and smallest things gets him and drives him to a great deal of despair leading to an attempted suicide! (First suicide attempt in episode 1 where he was hanging on a tree) Even his name has unlucky characters which whenever flipped horizontally, forms a kanji of “despair” that fits his ideals as well as his personality.

On a spring day, he had met a high school student named Kafuka Fuura, who appeared to be a normal high school student walking towards the school giving off such a happy and blooming aura found him hanging on a sakura tree. She then panicked and tried to save him from his state. (She almost killed him though) Luckily he survived. Kafuka saved him because she explained no one would commit suicide in such a beautiful day and beautiful place. She then names the trees and referred to Itoshiki as “Pink Supervisor” and tried to pay him 50 yen so she can continue calling him by that nickname. By that time they also talked for a bit and Itoshiki slowly learns how innocent and clueless Kafuka was. Having enough of the strange girl, he sped up and went to school only to find Kafuka as one of his students. He is apparently their homeroom teacher.

And meeting Kafuka was just the beginning. He always gave off negative aura to his students by saying “there is no hope” and slowly affects them with despair; Kafuka would all blow it off and would enlighten everyone. To put it simply, Kafuka is the opposite of him.

But Kafuka’s not the only one he should be concerned of. Each of his students have their own issues and different personalities far more greater than him posing challenges that he must overcome.
Though it is dark and deep, Sayonara Zetsubou sensei is quite funny and humorous in a lot of ways.

One of his students, Chiri Kitsu, is a perfectionist down to the last detail. Her hair is perfectly parted in the center and her appearance is extremely tidy. She would always straighten things up or anything she doesn’t find as “satisfying” or “perfect” in her eyes. She gets irritated and annoyed everytime something just doesn’t sit right. She has a wide knowledge about areas that are violent historical events. She is always against Itoshiki but then she would demand marriage from him after they accidentally “slept” together on the same bed. She’s one that “prefect” type of student but she’s definitely not the class representative. One thing funny about Chiri is that she can hide things like razors and knives in her bra. One episode featured that she had her all-seeing third eye that appeared on her forehead.

Another one of his students is Kobushi Abiru. She’s the 19th student of class F who is often seen with bandages around her face. People thought her bandages came from things such as ‘’domestic abuse’’ but that’s not the case. It turns out Abiru has a tail fetish. She gets her wounds from angry and irritated animals from pulling their tails. If you’re wondering why, she works in a public zoo. She also has a collection of fake animal tails inside her room. (Really) She also has heterochromia, where one’s eye color has a different color than the other.

Our student #20, Kiri Komori is a shut-in; most people refer to as ‘’Hikikomori’’ Kafuka and Itoshiki joined forces to make her go to school. She left her house but now she’s locking herself up in the school. She appears randomly inside the school lockers and rooms. (She pops up randomly) She often wraps herself up in a blanket. When Itoshiki moved in to the school’s night-watch room, Kiri moves in with him too. Although she sleeps inside his closet and does all the work. (Cleaning, washing, etc.)
Trivia: Kiri never changes her blanket. It’s always the same one but she does change its pattern whenever possible.
She also has romantic rivalry with Matoi Tsunetsuki.

Known for stalking Itoshiki, Matoi Tsunetsuki is a very obsessed with her ‘’Boyfriend’’ (Which is Itoshiki) But that’s not really the case. Itoshiki doesn’t acknowledge her at all. So she’s just assuming they are in a relationship. Talking about stalking and stuff, Matoi is an extreme one. She goes in and out of her target’s own house with a key duplicate, she plants bugs in his room, and she always call or text him after a few minutes, and usually tailing him. If you’ve watched the anime you’ll see the part where she adapts how Itoshiki is usually dressed. (Might be a way to impress her ‘’boyfriend’’) She’s one persistent student.

If anybody’s looking for a normal student of Itoshiki, there’s a girl called Nami Hitou. So normal and so plain, so bland and boring that she even has her own catchphrase which is ‘’Futsuu te Iuna!’’ or ‘’Don’t say normal!’’ in English. It is said that she was supposed to be the main heroine of the anime but then it was scrapped. But because of being a normal girl, she would go far to get attention by all means like becoming a truant and fake suicide attempts.

Fujiyoushi Harumi, the 29th student of Itoshiki who draws doujinshi. Has a passion for drawing Yaoi. (So basically, she’s also a fujoshi)She has quite wild ideas and coupling instinct by pairing off males and even thought about pairing Itoshiki to his friend. Her tastes are unusual or abnormal rather. She also gets recruited for athletic clubs because she has great athletic abilities but she’s not interested in it.

Here’s another interesting student of Itoshiki. Sekiutsu Maria Tarou, quite an unusual name right? Here’s some of her background. Maria is an illegal immigrant from an unknown country. (Said to be somewhere in an Asia neighboring country.) But according to Itoshiki, Maria might be from Philippines. Here’s more interesting, she bought a male’s birth certificate from Itoshiki’s class and attends school in his place. She assumes her gender is legally a boy but she’s actually a girl. And because of extreme poverty she’s facing, she would look for food in the garbage cans and even on the ground. Everyone calls her “Maria” but Kafuka addresses her as “Mataro” The two of them get along so well because of their optimistic personalities. My my, quite the polar opposite of Itoshiki. She also doesn’t want to wear panties or shoes because she’s uncomfortable with it.

If there are loud girls, normal girls, bad girls, there are also the shy types. Otonashi Meru, who’s very shy and only communicates via text messaging or e-mails through her cell phone;the content of her texts and e-mails are very abusive and poisonous.Even her e-mail address is “hazukashigariyasan” meaning “full of shyness”. When she gets stuck in a place without any signal, she starts uttering demonic-like language (the one like in the movies) her family seems rich too. It is said that Meru stopped talking after being teased about her voice during her childhood days.

Another one problematic student Itoshiki has is Kimura Kaere. She suffers from ‘’DID’’ or ‘’Dissociative Identity Disorder’’ meaning she has more than one personality. Her appearance is like that of a model in foreign countries. (Usually having cliché blonde hair and bluish eyes) Is is said she is from America. She criticizes Japanese culture and tends to say she’ll sue people who flash at her panties. Her second personality is called ‘’Kaede’’ the total opposite of her which is well-mannered and a yamato nadeshiko (ideal Japanese woman) the reason why she developed such disorder is because of the conflict traditional and cultural differences and her motherland. She also produces panty shots and her panties have very bizarre patterns on it.
Trivia: Kaere is left handed.

Here’s one more student that has guilt complex. Ai Kaga, a very apologetic girl thinking that she’s harming other people on the things she does. One thing is that her actions don’t really harm or bother other people. It’s just how she thinks. She even tried to be a tsundere one time.

Manami Ookusa, probably one of the students who have a sad background. Manami is a married high-schooler and forced to work different part time jobs all at once to pay off her husband’s debt. In episode 5, it is revealed that her husband isn’t faithful to her at all and she is well aware of it. She tried getting a divorce plenty of times but her husband but she always fail to do so.

If there are good girls there are also mean ones. Mayo Mitama earned the title. She is very mean in every aspect. Always doing bad things and more awful stuff. However, nobody believes that she’s doing all of it.

Enough with the female main students, let’s move on to the male students often seen in the series.
Kagerou Usui, no.3 student of class 2-F and the chairman of the class. His appearance is average and he has a bald spot on his head which he often combs it over.

Jun Kodou, the type of student who gets everyone to tears by his great story telling. He was even nicknamed as ‘’Genius Storyteller’’ because there’s no story he can’t tell. A little bit of trivia, he would check out every book Itsohiki wants to read.

Let’s also check out Itoshiki Nozomu’s family tree. First off, his pretty younger sister Rin Itoshiki. Rin is the only daughter and the family’s fifth child. She is the head teacher of the Itoshiki School of Flower Arranging. She has a lady-like attitude and is very responsible. Being a part of the Itoshiki, her name also becomes ‘’Zetsurin’’ meaning ‘’peerless’’ or ‘’unrivaled’’.

Let’s also meet the doctor of the family. Mikoto Itoshiki. He’s older than Nozomu and works at Itoshiki private clinic. Being the third child, he resembles Nozomu so much. His name when written sideways, is ‘’Zetsumei ‘’ which means ‘’death’’ that contradicts the career he has chosen.

Enishi Itoshiki, the older brother of Mikoto and Nozomu. His name written in sideways means ‘’disinherited’’. He worked as a divorce attorney but currently works as a marriage councilor helping couples that can’t get married while alive. Most of the time, he remains unseen in the anime.

So, are you interested in watching it? I bet you do! After reading the synopsis and character background, plot and a little bit of trivia about the characters, it just makes your mind wonder how does this end? Worry no more. Sayonara Zetsubou Sensei has many other anime series. Be sure to watch!