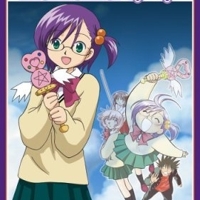 The story focuses on a cold and distant 17-year-old girl, Nanaka Kirisato, who only cares about studying to get good grades in school and being accepted into a good college. Nenji, her childhood friend, doesn’t really care about school and will often get into fights.

Soon, Nanaka has an accident that causes her mind and memories to be reverted back to the time when she was 6 years old. Nenji ends up becoming the 6-year-old Nanaka’s babysitter until they can find a way to turn her back into the 17-year-old Nanaka, which causes trouble and comedic situations.

Nanaka 6/17 is an anime adaptation of the comedy-romance manga series under the same name, created by Ken Yagami. Produced by J.C. Staff, the anime series aired a total of 12 episodes (plus 1 OVA) between January 8, 2003 and March 26, 2003.

Episode 1: Nanaka Kirisato, 6 Years Old
Nanaka scolds Nenji after he gets into another fight. Nenji, in the midst of his anger, says that he no longer wants to see Nanaka again. This shocks Nanaka, causing her to fall down a flight of stairs. The accident caused an unexpected effect – Nanaka’s mind had reverted to her 6-year-old self. Nanaka’s father then asks for Nenji to keep this a secret, and to watch over her daughter at school. Later, Nanaka goes missing at the hospital, and Nenji finds him at her old kindergarten school. Nenji then tries to comfort her.

Episode 2: Nanaka the Pianist
Amemiya starts to teach Nanaka how to play the piano, after the latter volunteered to play for the coming choir competition.

Episode 3: Nanaka the Big Sister
Jinpachi loses a bet against Nenji, and had his hair cut after him as punishment. Coincidentally, Nanaka’s glasses get broken, and she mistakes Jinpachi for Nenji. She then proceeds to take him to activities resembling a date. Meanwhile, Jinpachi’s sister Satsuki misinterprets when she sees her brother with a girl, and tries to attack Nanaka. However, Nanake inadvertently dodges her attack. After a second failed attempt, Satsuki asks Nanaka to be her big sister.

Episode 4: Nanaka: Three Good Friends
Amemiya accidentally discovers Nanaka’s condition, when she falls sick and needed to visit the hospital. Nenji asks Amemiya to keep this a secret, but she refuses due to envying the attention Nanaka receives from Nenji. Later, some schoolgirls steal Nanaka’s uniform during P.E. class, but Amemiya changes her mind and bails Nanaka out. Amemiya then confesses to Nanaka about her feelings toward Nenji, but she misinterprets it and thinks that the three of them are now best friends.

Episode 5: Nanaka’s Triple Date
Kuriko Aratama falls in love with Nenji after he saves her from a bully. Later, Nanaka’s movie date with Nenji is interrupted after Kuriko misplaces her wallet. Nanaka, noticing the attention Kuriko gets from Nenji, expresses her jealousy. She then takes Nenji on a date to an amusement park, but Kuriko manages to go with them.

Episode 6: Nanaka and the School Trip
Nanaka returns to normal after a school trip to Kyoto.

Episode 7: Nanaka and the Rest of the Trip
Despite returning to her normal self, Nanaka continues to be with Nenji during their school trip. After overhearing Nenji tell Amemiya that he is sometimes annoyed with the normal Nanaka, she runs away to one of the Kyoto temples. Nenji manages to catch up to her, but Nanaka faints a few moments later and reverts back to her 6-year-old self.

Episode 8: Nanaka the Nurse
Nenji catches a cold while his parents are out of town, leaving him with no one to nurse him back to health. Nanaka decides to take the matter into her own hands, even dresses up as a nurse, but ends up causing even more trouble. Fortunately, a Magical Domiko fan named Yoshida, arrives and helps them out.

Episode 9: Nanaka and the Cultural Festival
The cultural festival is coming soon and Nanaka’s class plan to do a play. When the discussion arrives regarding with what to do, Nanaka suggests to do a play involving Magical Domiko. Since it was her idea, she was then assigned to write and direct the play. Later, she returns to her normal self. After Yoshida arrives to help, Nanaka then proceeds to write the play. The next day, Nanaka reverts to her 6-year-old self once again.

Episode 10: Nanaka 17 to Nanaka 6
6-year-old Nanaka is back but clueless with how to continue the play. Fortunately, her 17-year-old-self had already foreseen that this might happen, and made a letter containing the cast list placing Kazamatsuri as Domiko. However, Kazamatsuri catches a cold during the cultural festival, and Nanaka now has to take the role. With the encouragement from her 17-year-old-self, Nanaka manages to make the play a success. Later, Nanaka’s doctor explains that she is suffering from multiple personality syndrome.

Episode 11: Domico Nanaka
Nanaka overhears Nenji say that he did not transform with her, prompting her to worry about how she will be treated. To make things worse, her favorite show Magical Domiko is going to air its final episode. Nanaka dreams that she became Domiko, and that she is with Amemiya, Nenji, and her other friends.

Episode 12: Nanaka Kirisato: 17 Years Old
17-year-old Nanaka explains to Nenji that her younger self might show up for one more time. As a farewell date, Nenji takes 6-year-old Nanaka to the amusement park that night. Afterwards, Nanaka returns to her normal self. However, she dreams about the final Domiko episode again, and their she meets her 6-year-old-self. She wakes to find herself in the hospital, and is finally at peace with Nenji and the others.

Anime Rating
7.6/10
244 users rated this.
Similar in these categories.