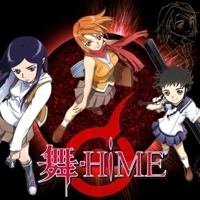 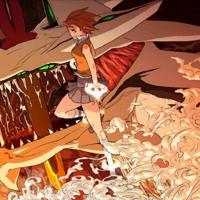 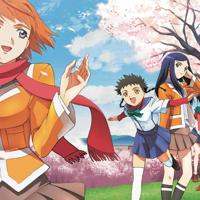 A group of thirteen girls has the power to materialize "Elements and summon Guardians known as “Childs”. They are brought to Fuuka Academy to fight the enigmatic creatures known as Orphans. Each of them has different ideologies for discovering why and who they fight for.

The anime series Mai-HiME was produced by Sunrise Directed by Masakazu Obara and authored by Hiroyuki Yoshino, the series premiered in Japan on TV Tokyo on September 2004 until March 2005. The anime is all about girls with the power to materialize photons gathered at Fuuka Academy for a secret purpose.

Episode 1: “A Girl’s Most Important Event”
The Siblings Mai Tokiha and Takumi found a girl with a sword while they are on a boat. The girl is Mikoto Minagi. They tried to pull her up but Natsuki Kuga attacked them. The boat was destroyed; Mikoto and Natsuki fought each other showing strange powers.

Episode 2: “After-School Secrets?”
On the first day of class Mai skipped her class to have fun with Mikoto, they ate a bowl of ramen. Takumi got attacked, Mai and Naisuki rushes to rescue Takumi leaving their differences aside.

Episode 3: “Dance of Flames/Star’s Oath”
Kagutsuchi was summoned by Mai to defeat the Orphan. Mashiro told Mai that she is a HiME and she’s necessary for fighting Orphans. Mai and Mikoto became roommates.

Episode 4: “Mischief of the Wind”
Mai, Mikoto, and Natsuki join forces to stop the Orphans causing trouble at their school.

Episode 6: “The Passionate Age of 17 (^^ ;)”
Mai, Takumi and Mikoto got appointed to prepare for the wedding of Yuuichi and Shiho Munakata. Shiho got worried of Yuuchi making Mai root for them. A new HiME named Midori Suguira she became a teacher.

Episode 7: “Lost Kittens”
Nao Yuuki uses her powers to steal, the other HiME stopped her.

Episode 8: “Precious Thing.”
During the Festival of their school, Akane Higurashi fought an Orphan to protect her boyfriend, name Kazuya Kurauchi but Miyu Greer killed Akane’s Child, and Kazuya was killed. Mai also fought Kagutsuchi and showed her power to Reito the second time.

Episode 9: “The Sea, the Maidens, and Natsuki’s Secret”
Mai’s friendship with Reito Kanzaki and Tate continues to grow. Natsuki brought Mai to an abandoned First District Building, and told them about her plan on destroying the first district.

Episode 10: “Cake Wars!!!”
Midori Suguira organized a cake baking contest with Mai and her companions but an Orphan interrupted the contest. Takumi was saved by Akira Okuzaki a HiME from an Orphan attack.

Episode 11: “Dance of Light and Darkness”
A school nun named Yukariko Sanada who is also a HiME defeated the stalking vampire that seeks HiMEs. Nagi told Mai not to get involved with it.

Episode 12: “The Smile of an Angel”
The Searrs Foundation abducted Natsuki and Yukino Kikukawa, Mai and Mikoto rushes for their rescue. Alyssa Searrs took control of the operation with Joseph Greer and Miyu Greer.

Episode 13: “Night of the Tamayura”
Mai and Reito go on a date during the romantic festival held by their school, Tate interrupted when they are about to kiss each other which made Shiho angry. Alyssa and Miyu tested Alyssa’s power. As Natsuki investigates District one.

Episode 14: “The Targeted Academy”
Alyssa wrecked a bridge using a shot from heaven, the Searrs group raided the school with its personal army, Nagi and Mashiro gathered all the HiMEs in an underground bunker.

Episode 15: “A High School Girl ☆ Soars To the Heavens”
The HiMEs is successful in driving away the Searrs soldiers from their school. But Alyssa attempted to destroy the school and its students with a single shot from her Child. But Mai blocked the beam with Kagutsuchi that it made her look like she got killed. Joseph Greer was killed by Miyu.

Episode 16: “Parade ♪”
Mai and the other HiMEs was gathered to go have fun at the Karaoke. Takumi found out who Akira really is, and now she needs to kill Akira. Nagi told everyone that there are no more Orphans but they have to fight each other’s Children.

Episode 17: “Deceitful Lips”
An evil star is prophesied to come, the HiME gathered to fight each other because only the HiME who defeats all the others is the only one can stop the evil star.

Episode 18: “――The beginning.”
Yukariko betrayed everyone and it causes Natsuki to fight with Nao. Meanwhile, a ghost-like, flute-playing HiME attacked Mai.

Episode 19: “Labyrinth of the Heart”
The HiMEs are starting to fight each other; Mai got attacked by blackmailed Yukino. Takumi is planning to go to America alone fearing that he’ll only become a burden to Mai. Akira is even more steadfast in putting Takumi in danger. Shiho kisses Tate in front of Mai to hurt her feelings.

Episode 20: “Dance of Flames/Tears of Destiny”
Mikoto was brainwashed by a crow-like Child, the Child of the flute-playing HiME to fight Akira’s Child and was successful in killing it. Takumi evaporated in Mai’s arms, Mikoto and Mai fought each other.

Episode 22: “Collapse”
After the final battle, a massive amount of students are missing. Haruka and Yukino looked for Shizuru and were found with Natsuki. Mai goes to Obsidian Prince to seek an answer if killing the HiME’s Children will grant him powers to revive Takumi.

Episode 23: “Love and Friendship, Heartlessness”
Yuuichi learns that Natsuki has affection for him and he goes in search of her. Shizuru defeated Yukino, Haruka evaporated. Midori was interrupted by Mikoto in giving the key to Miyu. Mikoto now works for the Obsidian Prince.

Episode 24: “Love is a Battle”
Shizuru killed Nao’s Child, which also killed Nao’s sicked mother. Shiho reveals that she is the mysterious flute-playing HiME. Mikoto destroys Shiho’s Child which also causes Yuuichi to evaporate. Mai tried to tell him that she loves him while he is evaporating.

Episode 25: “The Moment of Destiny”
Shizuru and Natsuki both evaporate while fighting since they treasure each other the most.Miyu and Mai tried to confront the Obsidian Prince but got interrupted by Mikoto. Miyu also goes to kill the Obsidian Prince.

Episode 26: “Shining ☆ Days”
Mashiro was awoken by Miyu from a frozen block of ice. Mashiro revived all the people who had evaporated. Yuuichi rescued Mai and Mikoto was successful in defeating Reito. The Obsidian Prince transform into his true form but still got defeated by Kagutsuchi that causes everyone returns to normal.

Anime Rating
8.1/10
844 users rated this.
Similar in these categories.