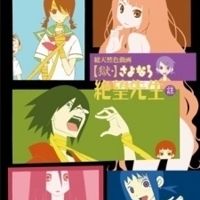 Limited editions of volumes 15 and 16 of Kôji Kumeta’s Sayonara Zetsub? Sensei manga in Japan will bundle original animation DVDs (OADs) along with a release in between the manga releases. The first OAD will ship with the limited edition of Volume 15 for 3,470 yen on October 17. (The numbers 3, 4, 7, and 0 can be phonetically pronounced in Japanese as “Sa-yo-na-ra.”) The in between release will be out on December 10th. The third release will ship with Volume 16 for the same price on February 17. Director Akiyuki Shinbo, the animators at SHAFT, and the music producers at Starchild Record will return from the two earlier television anime series. Likewise, the main cast members will reprise their roles, including Hiroshi Kamiya as the eternally gloomy teacher Nozomu Itoshiki with a class of oddball students. (Source: MAL)

Anime Rating
8.2/10
395 users rated this.
Similar in these categories.