Ghost in the Shell 2: Innocence [Movie] 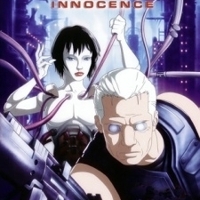 The heavily cyborged police officer Batou, newly partnered with the mostly-human Togusa after the diappearance of Major Motoko Kusanagi, is assigned to investigate a series of murders committed by prototype “sexaroids” – female androids created for sex. (Source: ANN)