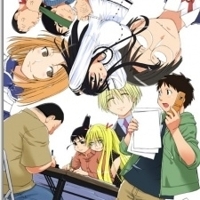 The Society for the Study of Modern Visual Culture, otherwise known as Genshiken, is now under the supervision of a more confident Sasahara. Things have changed in between semesters, and the otaku club now has a new otaku-hating member named Ogiue. Sasahara’s initial goal of starting a doujin circle and selling those fan-made magazines at the next Comic Festival becomes a reality, but reality is a cruel master… who apparently crossplays. Afterward, the club is abuzz with talk about Tanaka and Ohno’s relationship, which takes a hesitant step forward.

Genshiken 2 is the second season for the comedy anime series Genshiken. Produced by studio Arms, the anime series aired a total of 12 episodes between October 11, 2007 and December 27, 2007.

Saki Kasukabe
Although being a member of the Genshiken, Saki Kasukabe vehemently hates otaku culture, and is nowhere nearly similar to an otaku. Just like his boyfriend, she is fashionable and confident, but is violent and occasionally smokes. However, as the series progressed, Saki developed close bonds with the members of Genshiken, and even saves the club from being shut down twice.

Harunobu Madarame
Personally chosen as successor by the first president, Harunobu became the second leader of Genshiken. Of all its members, Harunobu is the most hardcore of them all that his clubmates call the highest level of an otaku as a “Harunobu”. He particularly loves Gundam, and overspends on doujinshis. He takes pride on his purchases, even though when he just randomly picks them. Due to his loud and adamant support for otakus, he became the nemesis of Saki, who was working really hard to “cure” his boyfriend. Later in the series, he develops feelings for Saki, but decides to keep them for himself as he was afraid it would ruin their friendship. A lesson he learned from playing too much porn games.

Souichirou Tanaka
Out of the three original upperclassmen, Souichiro has the most neutral demeanor. He is not as eager to rant like Madarame, but more confident than Kugayama. Hardcore cosplayer and genius costume designer, he can bring costumes to life even when they are almost considered to be impossible. While well-versed in many areas of model and figure culture, Tanaka is personally not experienced with figure-modeling, but attempts to learn by sculpting a model of Shinobu from Kujibiki Unbalance.

Mitsunori Kugayama
Mitsunori is one of the first upperclassmen of Genshiken, and was its only artist prior to Ogiue’s arrival. He has very low confidence, and stutters most of the time. Despite being quite talented in drawing, he lacks motivation in finishing full-fledged doujinshis.

Kanako Ohno
Kanako is the fourth president of Genshiken, and was raised in the United States since she was in the third grade. She ended up joining Genshiken due to the nature of her fetish. Although being very sexy and womanly, she has a weird preference to yaoi, especially those involving muscular, bald, middle-aged men. She is normally soft spoken and shy, but becomes upfront when it comes to her yaoi fetish and in cosplaying. Thanks to her large breasts, she became the main attraction for Genshiken during student fairs.

Chika Ogiue
Former member of the Manga Society, Ogiue became the fifth president of Genshiken despite her hate for otakus, especially females. Interestingly, her obsession for yaoi exceeds Kanako’s. She is easily swayed, as she eventually agrees to things she initially disagrees with. Ogiue has terrible eyesight, and is still an amateur artist if compared to Kugayama. She has a tendency to fantasize about and then draw highly sexual homosexual encounters between the men she knows in real life, particularly Sasahara and Madarame.

Manubu Kuchiki
After being kicked out of the Anime club, Kuchiki joins and becomes a full member of Genshiken together with Ogiue. He has a noisy and obnoxious style speech, and hyperactive mannerisms that often offend other people. He is often beaten throughout the series, due to his failed sexual attempts both on women and men. Despite all this, he does mind whatever the others think of him, and in fact enjoys it.

Episode 1: The New President’s Intentions
Things finally stir towards Genshiken’s way after they manage to secure a doujinshi’s vendor spot in the next Comic Fest. However, the club needs to quickly figure out how to actually make a decent doujinshi. Will Sasahara and his club pull through?

Episode 2: Friction at the Club Meeting
Its nearly the end of July, and despite with Ogiue’s assistance, all they have to show for are two pages of doujinshis. Now, the club members have to set aside their differences and work together, if they wish to meet the looming deadline.

Episode 3: One Hot Summer’s Day
After days of sleep deprivation and overtime, Genshiken manages to produce a doujinshi for their stand at the Comic Fest. However, things are not looking too well, as they are anything but selling. Fortunately, Ohno arrives in cosplay and attracts attention to their spot.

Episode 4: Are You Going Out?
The rest of the club notices the romantic tension between Ohno and Tanaka. However, both of them are too nervous to make a first move, leaving their relationship in a stalemate.

Episode 5: Madarame the Total Bottom
Ogiue’s fujoshi imagination bursts out of control, after witnessing Sasahara and Madarame get caught up in an embarrassing situation.

Episode 6: An Issue of Taste
Ogiue goes to buy the latest yaoi doujinshi under the guise of her high school persona, in order to avoid the other club members. Things quickly go downhill after she inadvertently runs into rest of the club.

Episode 8: Cos-ken
Ohno is declared the new president of Genshiken, and the club’s future is anything but uncertain. Meanwhile, Ogiue gets accepted to make a debut at the next Comic Fest.

Episode 9: It Always Rains on the Job Hunt
Sasahara is struggling as he continuously fails in his job hunt. Meanwhile, Ogiue is having difficulties in finding inspiration without Ohno’s fetishes.

Episode 10: Otaku from the USA
Angela Burton and Susanna Hopkins, friends of Ohno from the US, temporarily join Genshiken for the upcoming convention.

Episode 11: Real Hardcore
It is now time for the Comic Fest. Sasahara assists Ogiue in preparing her booth, while Angela and Ohno cosplay in costumes made by Tanaka.

Episode 12: What Lies Ahead…
Sasahara’s hopes with getting a job flickers after his failures. With him almost giving up, Genshiken encourages him to give it one last shot.

Anime Rating
8.1/10
873 users rated this.
Similar in these categories.