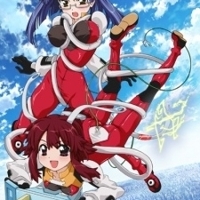 Sent from Earth’s parallel planet called Life Core, Juuden-chan, also known as charger girls, scout the human world to recharge depressed and hopeless individuals. Equipped with scientifically advanced equipment, Juuden-chan transfer positive energy to cure depression without being seen by the human eye.
However, Plug Cryostat, one of the active Juuden-chan, encounters a young man named Sento Oumi who is able to see her. What does this mean for her as a charger girl?
Follow Plug in her journey as she learns to be a better charger girl, with the help of her human friend Sento!

Charger Girl Juuden-Chan, also known as Fight Ippatsu! Juuden-Chan!!, is an anime adaptation of the comedy-sci fi manga under the same name, written and illustrated by Bow Ditama. Produced by Studio Hibari, the anime series aired a total of 12 episodes (plus 1 OVA) between June 25, 2009 and September 10, 2009.

Episode 1: Plug in!
Plug encounters Sento, the only human that ever saw her, while she was searching for targets to recharge. She notices that Sento’s sister, Hakone, is under depression, and learns that it is caused by Sento not letting her help him. Sento refuses to listen and prevents Plug from recharging her sister. However, after her sister almost jumped off a building, Sento finally helps Plug with recharging her. Hakone then gains confidence, and confesses her feelings to Sento.

Episode 2: Timing!
Plug finds herself rivaled in recharging targets by her colleague Arresta. The charger girls then notice an increase in the number of repeaters — humans who were already once recharged but fell back to depression. In an attempt to solve this dilemma, Plug seeks for advice from Sento, who tells her that simply recharging people won’t solve the root cause of their depression. Later, Plug decides to follow a student, with hopes that she will completely solve his depression. She manages to recharge the student at the right time, despite having Arresta almost ruining her plan.

Episode 3: Lock-On!
Arresta is tasked with taking care of Plug, a duty she greatly objects with. In no time, Arresta learns that Sento can see charger girls, after getting hit by his baseball bat for the second time. To prevent Arresta from reporting this and Plug getting into trouble, Sento is cornered in a bet against Arresta. They compete on whoever locks on to the most C targets, with Arresta reporting to the office about Sento’s ability should she win. Despite not having the advanced equipment of charger girls, Sento wins the bet, and Arresta promises to keep her word. However, Arresta can’t take her mind off the arousing feeling she gets when hit by Sento’s baseball bat.

Episode 4: Iono Crisis!
Sento’s childhood friend, Iono, has a crush on him and is planning to confess. She prepares a present for him, but she gets locked inside the student council room after daydreaming. Meanwhile, a thief breaks into school, and robs the school’s budget along with her present. To make matters worse, Sento tells her that she is like a sister to him, after she goes to him for comfort. Later, Arresta accidentally recharge the culprit, prompting the thief to return the stolen goods.

Episode 5: Happening!
Sento, his boss, Hakone, Iono, along with Plug and Arresta, decide to relax at the beach and take a day off. Plug investigates a writer after noticing his strange behavior, despite a good depression ranking. She resolves the problem with Sento’s help.

Episode 6: Counter-Current!
Plug meets a boy named Kenta, who has a Z rank and is deemed impossible to be recharged. Any charger girl who attempts so will get electrocuted due to his depression’s severity. Despite this, Plug tries to recharge him and sustains heavy injuries.

Episode 7: Maid in Arresta
Arresta receives a scolding from Pulse, their head supervisor, for allowing Plug to get injured. As punishment, Arresta has to look after Plug’s area while she is still undergoing recovery. Arresta finds herself blackmailed, after Plug a footage of her crying. In order to make Plug delete the footage, Arresta must now follow her crazy requests. Later, Plug is visited by her colleagues.

Episode 8: Craziness and Kindness
Eager to get back to work despite her injury, Plug is allowed to lock on targets with Arresta taking the recharging duty. Sento gives Plug a massage to help her injuries. Meanwhile, Chief Pulse is starting to become aware of Sento’s connection with the charger girls.

Episode 9: Audit Division, Special Cases Section – Leakage Girls
Plug and Arresta are called to Chief Pulse’s office, and are introduced to the Leakage Girls, Reka and Kuran. The Leakage Girls are tasked to monitor electrical leakage, and individuals who are accused of smuggling electricity. Much to their surprise, the Leakage Girls reveal that they know about Sento’s ability. Later, the Leakage Girls abduct Plug, and order Sento and Arresta to meet them in a certain location. It then turns out to be a misunderstanding, and everything was cleared up after a harmless test.

Episode 11: Watch out! Discharger Girl!
Rona, one of the Discharger Girls, goes on a discharging rampage after getting upset that humans can’t see her. Later, Plug discovers that Sento has fallen into depression, and has lost his ability to see or touch charger girls. Moments before being able to recharge Sento, she is interrupted by the Discharger Girls. Arresta arrives and just like Plug, was shocked to see Sento’s state.

Episode 12: Fight! One Shot!
Arresta fails to recharge Sento, despite her efforts. Meanwhile, Plug finds Kenta has relapsed to B Rank, and is making his way into the river. Plug attempts to recharge him and fails. However, with the help of Hakone and Iono, Arresta manages to lead Sento just in time to save Kenta. The combined efforts of Plug’s unit does not only recharge Kenta, but also recovers Sento’s ability to see them.

Anime Rating
6.7/10
231 users rated this.
Similar in these categories.