The Legend of the Legendary Heroes [TV]

The legend of the legendary heroes 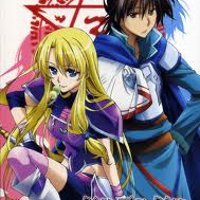 Plot Summary
Fantasy School
You are viewing an unapproved revision.

Ryner Lute is a lazy student of the Roland Empire Royal Magician’s School. One day, the Roland Empire goes to war against a neighboring country Estabul, and Ryner loses his classmates in the battle. After the war, at Emperor Sion Astarl’s command, Ryner sets out on a journey to find the relics of a “Legendary Hero”. During his quest, he finds out that a deadly curse is spreading across the continent.

Anime Rating
8.4/10
432 users rated this.
Similar in these categories.

Got this at Otakon 2013. Very fun series with good action.