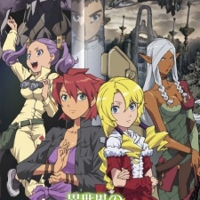 Kenshi Masaki is the half brother of Tenchi Masaki and used to live in Japan, that is until he was summoned to the land of Geminar. The land of Geminar has been witness to an endless amount of wars that have been fought using Seikijin, bio-mechanical weapons controlled by a capable warrior called Seikishi and it seem someone has a reason for Kenshi to be in Geminar, but who and why are not known.

Isekai no Seikishi Monogatari released in North America as Tenchi Muyo! War on Geminar is an OVA anime series that is a spin-off of the Tenchi Muyo! Series created by Masaki Kajishima. Produced by AIC Spirits and beSTACK, the series aired thirteen episodes on pay-per-view network Animax between March 20, 2009, and March 19, 2010. It chronicles the story of a young boy named Kenshi Masaki, the younger brother of Tenchi Muyo a protagonist Tenchi, who is transported to the world Geminar. The story shares some character names and general terms from the anime Photon, another series created by Masaki Kajishimima. A light novel adaptation by Atsushi Wada was published by Fujimi Shobo on August 20, 2009, under their Fujimi Fantasia Bunko imprint. A manga adaptation was serialized in Comic REX and published by Ichijinsha on June 9, 2010, spanning two volumes. At Otakon 2012, Funimation Entertainment announced they have licensed the series for release in North America. The anime is part of the Tenchi Muyo! Ryo-Ohki continuity, taking place 12 years after the events of Tenchi Muyo! GXP.

Episode 1: The Black And White Mechanoid
Kenshi Masaki, a 15-year-old boy who controls the white Sacred Mechanoid, is ordered by masked man to kill Lasahra Earth, the ruler of the Shtrayu Empire, in order to return to his world. China Flan, Lashara’s bodyguard, pilots her Sacred Mechanoid and faces off against Kenshi, but loses overwhelmingly to his power even with the assistance of Wahanly Shume. While being held, all the girls are surprised at how Kenshi, a male Sacred Mechamaster, has been able to do what he can until Doll rescues him and takes him back.

Episode 2:
After seeing Kenshi’s capabilities in battle, Lashara decides to make him her servant while concealing the truth about him being a Sacred Mechamaster from the others. Kenshi becomes more aware of his duties as a servant while making new friends, and meeting Chiaia’s older sister Mexiah. Kenshi witnesses the Holy land and the academy that Lashara and Chiaia attend. Kenshi later meets Maria Nanadan, Lashara’s cousin and princess of Havoniwa, and her assistant Yukine.

Episode 3: To The Holy land
Lashara decides that Kenshi should work to earn his meals, and is later introduced to the Headmistress of Holy land Academy where he is later assigned various jobs on his first day. Later on, Mexiah clings to Kenshi and asks him to run away with her, at which Wahanly, Chiaia, Lithia, Yukine and Maria attack both of them for giving them such erotic massages. After the massages, all the girls have suffered some orgasmic effects to the point the Headmistress stops Kenshi from giving any more massages although he has been booked to give massages to those who want it just before their marriages.

Episode 4: Pendant
Later, while Kenshi talks about his past with Lasahra and Chiaia, Chiaia accidentally breaks the string of his crystal pendant necklace and replaces it with a handwoven red string, which much to her chagrin symbolizes love. With Kenshi acting as foreman and guide, the girls with exception of Lashara and Maria repair all of the damage caused in the last episode.

Episode 5: To Be Chased And Pursued
The competition comes down to Kenshi versus Aura(none of the other girls being capable of finding any food) and ends with Kenshi’s victory although the secret ingredients of his success shock everybody but Aura. Later in the forest, a competition between Kenshi and the girls involving gathering food from the forest and coking a hot pot dish is held with Kenshi’s freedom at stake.

Episode 6: Vacation
While making their way to the resort, Kenshi meets his classmate Ceres Taito-another male Rikishi who wants to run away with his girlfriend Hazuki and decides to aid them so they can live happily together. Flora Nanadan, the Queen of Havoniwa, has invited Maria and Lashara to come to visit her, especially to meet Kenshi while bringing along other guests. However, a group of bandits, led by Cordyline and her daughter Lan, target Ceres and Dagmyer as they are worth a lot due to breeding.

Episode 7: Competitive Sports Tournament
Dagmyer persuades the Student Council to hold a warrior tournament, and all the female students and staff placed bets on Kenshi to win the race. As the race commences, it ends being Aura and Kenshi as everyone cheers on, and later ends with Kenshi being the victor after Aura gives up. Because of a threat from Chiaia, Kenshi is unable to stop and begins running crazily around the Holy Land.

Episode 8: Invasion
While Kenshi has almost destroyed all the opposing Sacred Mechanoids with ease, it is revealed that Chiaia’s big sister Mexiah is, in fact, Doll, who pilots the black Sacred Mechanoid and is being controlled by Babylon. All hope is lost until Kenshi reveals his true capabilities as he pilots the white Sacred Mechanoid one again to all the females astonishment of Kenshi being a Sacred Mechamaster. As Kenshi and Doll fight to a draw, it is not long until Babalun reveals his true intentions, and with that Kenshi is ordered to retreat while thinking of Doll/Mexiah.

Episode 9: Expectations
Chiaia, still reeling from Dagmyer’s betrayal, has talked with Dagmyer about why he has aided his father, at which point she is persuaded to kill Kenshi. Doll later appears before Kenshi with the Shield of Gaia, and its destructive force forces Kenshi and the Swan to make a hasty retreat to Shurifon, Aura’s home. After arriving in Shurifon, Kenshi is later challenged by king Shurifon, Aura’s father, to see if he has what it takes to be a true warrior. Kenshi easily wins and the King decides to have Kenshi and Aura engaged.

Episode 10: Home
Just as the Swan is about to be destroyed, Yukine and her Sacred Mechanoid saves it at the last minute, giving Kenshi the chance to take out the bandits and the weapon in one go. After becoming a leader of the Swan, Kenshi is shocked to find out he is banned from excavating jewels on the ship’s hull. After telling her that he will protect her, Kenshi comes to the conclusion that he will make the Swan an independent state where all people can take refuge. The swan makes its way to Havoniwa, where it lies in ruins after an ambush by Cordyline’s bandits, who have taken over a defense weapon called the Meteor Fall.

Episode 11: Barrier Workshop
However, something changes inside Kenshi where he cannot forgive those who hurt Ceres and half of the white Sacred Mechanoid become black, where he then compresses the reactor and launches it elsewhere. Ceres and Hazuki later join the Swan, and Kenshi and the group make their way to the Barrier Workshop to see Naua Flan, Chiaia’s father. Kenshi goes to aid Ceres, only to be trapped with Ceres from a Sacred Mechamaster reactor, which is overloading and about to explode.

Episode 12: Fruition
Kenshi and the group realize that they need to find another source of power to match Kenshi’s strength. While Kenshi is asleep, the girls all talk about how Kenshi has helped them even though he is not actually involved in their world’s battle. However, it is revealed to be a trick as Babalun tries to take control over Kenshi, but Kenshi overcomes his magic. Meanwhile, Babalun vows to defeat Kenshi while Kenshi gains reinforcements to stop Gaia’s revival.

Episode 13: Gaia
As all of the girls scream for Kenshi with their affection, Lashara, Maria, Yukine, Mekiah, Chiaia, Aura, and Wahan all fight over who owns Kenshi, at which point Lithia points out that she, Morga and all the other girls in the Academy also want ownership and marriage rights to Kenshi. In the midst of the battle, Kenshi goes berserk and generates a Light Hawk sword, causing him to destroy the main core of Gaia and save Doll/Mexiah, who both have fallen in love with Kenshi. Babalun at which point he collapses and reveals his true identity as Rea Second.

Anime Rating
8.7/10
642 users rated this.
Similar in these categories. Full Dive: This Ultimate Next-Gen Full Dive RPG Is Even Sh***er than Real Life!
Watched By