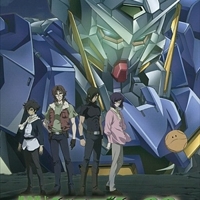 The year 2307 AD and we ran out of oil and coal – so instead we built giant solar power systems with some space elevators. True science fiction madness, right? Or genius! However only the most wealthy, powerful countries can enjoy this space power.

Three superpowers had ownership of the three orbiting elevators: The Union, based in the United States Of America, The People’s Reform League, made up of China, Russia, and India, and Europe’s AEU. The superpowers continue playing a large zero-sum game for their own dignity and respective prosperity. Even though it is the 24th century, humanity has yet to become one.

In this world where war has no end, a private militia appears advocating the eradication of war through force. Each possessing a mobile suit Gundam, they are Celestial Being. The armed intervention by the Gundams against all acts of war begins.

Anime Rating
8.0/10
462 users rated this.
Similar in these categories.