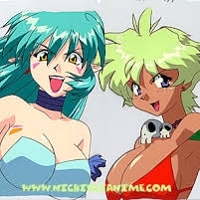 The story is centered on Natsumi, a young student from Japan who gains the powers of Mii, the well-endowed fertility goddess of a tribal culture. Natsumi and her friends must save the Earth from ultimate destruction by a “god of ruin”. The series is remembered for its wildly comedic moments and fanservice elements.

This 3 part Japanese OVA series was written by Yosuke Kuroda and directed by Yuji Moriyama. When her archeologist father excavates an ancient temple, beautiful Natsumi is presented with a powerful necklace that enables her to embark on a series of magical adventures with a little creature named Ongo and a shy girl with mysterious powers named Nami. Together, they set out to save the world from a 2,000 year old evil god of destruction! Warning this anime may cause dizziness, shortness of breath and sudden fits of primitive chanting!

Anime Rating
7.7/10
19 users rated this.
Similar in these categories.