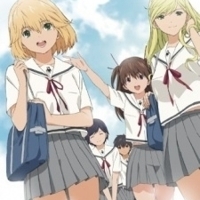 A series relating the intertwined stories about the “first loves” of several middle-schoolers and high-schoolers. Each episode tends to focus on a different character, however the developments established during previous episodes continue to play smaller roles in those following. As the series progresses, an array of unusual and unexpected love webs begins to blossom.

Hatsukoi Limited, also known as First Love Limited, is an anime adaptation of the comedy-romance manga series under the same name, written by Mizuki Kawashita. Produced by J.C. staff, the anime series aired a total of 12 episodes between April 11, 2009 and June 27, 2009.

Episode 1: Beauty A and Monster Z
Ayumi Arihara has always wanted a boy to confess his love to her. She gets what she wanted, but not entirely what she wished for. Misao Zaitsu, a boy that can only be described as unattractive, writes a love letter confessing his feelings for the beautiful Ayumi. To make things more complicated, not only does Ayumi plan to reject Misao, but falls in love with Misao’s younger brother Mamoru. Later, Ayumi is abducted by people who wants to lure Misao out.

Episode 2: Yamamoto-san from Next Door
Kusuda asks Mamoru about his feelings toward Ayumi, after noticing his lack of joy after Ayumi gave him a present. Mamoru confesses that he is in love with his neighbor, Misaki Yamamoto, who sees him nothing more than a younger brother.

Episode 3: Wavering Unbalance
Enomoto and Dobashi’s class is busy discussing for the upcoming school sports event. Enomoto recommends Dobashi to participate for the 100-meter sprint, for which Dobashi retaliates by recommending Enomoto to take cheerleading duties. After none of her classmates volunteer to help, Kusuda decides to take the job. However, Enomoto is not very fond of Kusuda, particularly because of his bland appearance. She then decides to reject Kusuda’s help, and work on the cheerleading duties on her own. Despite the harsh words he received from Enomoto, Kusuda still helps her out.

Episode 4: The One I Love the Most
Yoshihiko and Koyoi’s parents goes out of town for work, much to the latter’s delight, as she could keep her brother for herself at home. Later, Yuuji forces a lollipop into Misaki’s mouth in order to explain his point to Yoshihiko. Hiding a secret attraction towards Misaki, Yoshihiko leads Yuuji away from her out of embarrassment. Misaki then calls Yoshihiko a few moments later, and invites him to talk at a local restaurant. Meanwhile, Koyoi follows his brother secretly, worried that he has feelings for another girl. Misaki unexpectedly confesses to Yoshihiko about her feelings for Yuuji, and asks him for help. Yoshihiko then agrees, despite his feelings.

Episode 5: Confused Diving
Gengurou Takei, a former Olympic swimming candidate, attempts to recruit Megure Watase to his school’s swimming club in a form of a challenge. It is important for Takei to find a new member, as their club will be lost if he fails to do so. Megure refuses, as she is embarrassed about her big breasts and the unnecessary attention it brings her.

Episode 6: Before it Snows
Kusuda and Sogabe decides to hold a Christmas Party, so that they may spend the holiday with the person they love. Enomoto plans to buy Kusuda a Christmas present, but encounters him at the store, much to her embarrassment. Surprised and unsure with what to do, Enomoto says harsh words to Kusuda. Later, after unexpected events, Enomoto and Kusuda are left alone to spend Christmas together.

Episode 7: Let’s Kiss
Kei Enomoto walks home with Haruto Terai, who she discovers to be dating her friend Rika Dobashi. Due to Dobashi’s tough and independent nature, Terai can’t help but feel that she does not need him in her life. Knowing that all this is true, Enomoto advises Dobashi, who later decides to make it up with her boyfriend.

Episode 8: The Melancholy of the Chocolate Bomber
It is now Valentine’s Day, and Misaki has no plans of letting this day go to waste. She plans on making honmei chocolates, and give them to Yuuji. However, Misaki finally learns about Mamuro and Yoshihiko’s feelings for her, and becomes indecisive. Ayumi and Koyoi, seeing this as an opportunity to discourage Mamuro and Yoshihiko’s feelings, decide to let the boys see Misaki give the chocolates to Yuuji. Surprisingly, Kusuda receives chocolates from Enomoto.

Episode 9: In Full Bloom for Those Memories
Nao Chikura focuses her attention on finishing a painting for the graduates, being inspired by a painting of Yukito Renjou. Yukito helps her finish her painting, but leaves Japan for overseas work, breaking Nao’s heart. Meanwhile, unaware of what has happened, Sogabe still tries to woo Nao’s heart.

Episode 10: Kappa Fight!!
Newly appointed President of the Theater Club Sumire Fudounomiya invites Kusuda to play the role of kappa in her upcoming play. Enomoto, despite her constant bickering with Kusuda, opposes the idea especially that Sumire is using dirty tactics in order to win Kusuda’s approval. Kusuda gets angry with Enomoto, after getting annoyed when she interrupted his conversation with Sumire. This upsets Enomoto, almost making her cry. Meanwhile, Meguru is challenged to a backstroke duel by Kyuuma. Kyuuma defeats Meguru, and Takei comforts Meguru saying that it was an opportunity for improvement. Later, Mamoru, Sogabe, and Kusuda plan to run away from home.

Episode 11: Boys’ Escape
The others start to worry after Mamoru, Sogabe, and Kusuda are nowhere to be found. Meanwhile, the boys are struggling as they have little money, hungry, and lost. The girls finally find them, when Enomoto spots the three boys vigorously pedaling their bikes away from a rampaging wild boar.

Episode 12: First Love Limited
Enomoto, Ayumi, Koyoi, and Nao plan their next move while relaxing at a spring. The boys on the other hand are still without luck, and they decide to vent their frustration at the nearby beach. Mamoru, Sogabe, and Kusuda yell their feelings for their loved ones, without realizing that the girls were just behind them. Sogabe confesses to Nao; Ayumi talks with Mamoru; while Enomoto happily tackles Kusuda to the sand. A few days later, Ayumi went to the Zaitsu household, to finally decide if she will choose the person who loves her, or the person she loves.

Anime Rating
7.5/10
333 users rated this.
Similar in these categories.