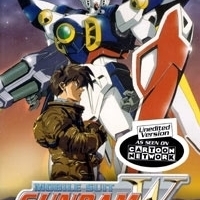 First Gundam series to be dubbed into English, and extemely successful during its Cartoon Network run…The story of Gundam Wing begins in the year After Colony 195, with the start of “Operation: Meteor,” the scientists’ plan for revenge against the OZ military organization. The operation involves five teenaged boys who have each been chosen and trained by one of the five rogue scientists, then sent to Earth independently in extremely advanced mobile suits, one designed by each of the scientists, known as “Gundams.” Their mobile suits are called Gundams because they are constructed from a rare and astonishingly durable material known as Gundanium alloy, which can only be created in outer space. Each Gundam is sent from a different colony and the pilots are initially unaware of the presence of the other pilots.

The series focuses primarily on the Gundam pilots; Heero Yuy (an alias, not to be confused with the martryed pacifist), Duo Maxwell, Trowa Barton, Quatre Raberba Winner, and Chang Wufei. Their mission is to attack OZ directly, in order to rid the Alliance of its weapons and free the colonies from its oppressive rule. The Gundam pilots each start out on separate missions, only to join up later on while on Earth. Along the way, Heero meets Relena Darlian, who later finds out that she is Relena Peacecraft, heir to the pacifist Sanc Kingdom.