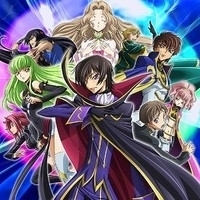 It’s been one year since the failure of the Black Rebellion and the supposed death of Zero. Britannia has assigned Area 11 a “correctional education” status, where Elevens are made an example of by brute force, to try to prevent any future uprisings and suppress rebellious thoughts.

Unsuspecting high school student Lelouch, oblivious to his rebellious past as Zero, stumbles upon a scheme on his life and the life of a mysterious woman known as C.C., who reveals to him his forgotten purpose and his “true” self. Destroying his assailants and declaring himself Zero once again, Lelouch sets out to finish what he started.

Episode 1: The Day a Demon Awakens
C.C. leads the Black Knights in retrieving a brainwashed Lelouch. Lelouch regains his memories and the Geass, taking on his identity as Zero once again. Elsewhere, Suzaku declares to Emperor Charles zi Britannia his desire to kill Zero.

Episode 2: Plan for Independent Japan
Lelouch reminiscences about his capture and how his father used Geass to alter his memories. The Black Knight destroys Babel Tower, affording them time to escape from the Britannian army. Later, Zero announces his return, and his desire for the creation of the United States of Japan.

Episode 3: Imprisoned in Campus
Lelouch discovers that the memories of his schoolmates at Ashford Academy were also altered, in order to erase Nunnally’s existence. Later, Lelouch fails to use Geass on Rolo, when the latter reveals that he also has Geass.

Episode 4: Counterattack at the Gallows
Lelouch manages to convince Rolo to spare him, in exchange, however, he must hand over C.C. Meanwhile, Gao Hai dies in the hands of Li Xingke, who assumes command of the Chinese Federation consulate.

Episode 5: Knights of the Round
Suzaku returns to Ashford Academy to learn if Lelouch had already gained his memories.

Episode 6: Surprise Attack over the Pacific
With the help of Rolo, Lelouch discovers Nunnally’s whereabouts and meet her. Unexpectedly, Nunnally expresses her desire to continue SAZOJ, after Zero tells her that Britannia is using her as a figurehead.

Episode 7: The Abandoned Mask
Nunnally is sworn in as the new Viceroy, which depresses Lelouch. Later, he announces his intention to join the SAZOJ.

Episode 8: One Million Miracles
Zero requests that in exchange for his exile, one million Japanese should be sent to the SAZOJ. He outsmarts Suzaku after every participating Japanese dress as Zero, forcing Suzaku to exile the one million participants.

Episode 10: When Shen Hu Wins Glory
Desperate to recover the Empress, the Eunuchs promise Li Xingke pardon if he rescues her, even granting him the Knightmare Frame Shen Hu. However, as soon as the Black Knights got cornered, Li Xingke and his rebels are betrayed.

Episode 11: Power of Passion
Zero covertly broadcasts as the Eunuchs openly admit their treason, which sparks rebellion throughout the Chinese Federation. Now that the Eunuchs are dead, Zero forges an alliance with Xingke and Tianzi.

Episode 12: Love Attack!
The students at Ashford Academy celebrate an event called Cupid Day. Meanwhile, Jeremiah Gottwald tests his Geass Canceller in public, which undoes the effects of the Geass on Shirley.

Episode 13: Assassin from the Past
Jeremiah finds and corners Lelouch, but ends up joining his cause after learning about the Emperor. Later, Rolo shoots Shirley, who then confesses her love to Lelouch during her final moments.

Episode 14: Geass Hunt
Lelouch slaughters everyone in the Geass Order, after blaming the Geass for Shirley’s death. Charles confronts him in a separate dimension called the Sword of Akasha. Elsewhere, Suzaku abducts and interrogates Kallen, after suspecting that Lelouch is responsible for Shirley’s death.

Episode 15: The C’s World
Charles gains immortality after killing V.V., and absorbing his powers. C.C. then transports Lelouch to her unconscious mind, where he learns more about her past.

Episode 17: The Taste of Humiliation
Using the G trains, the Black Knights shut down the Tokyo Settlement, and commences their attack.

Episode 18: Final Battle Tokyo II
Suzaku fires the FLEIJA, obliterating a massive section of Tokyo settlement. Lelouch loses it after Rolo tells him that Nunnally was lost in the explosion.

Episode 19: Betrayal
The Black Knights turn against Lelouch, and Rolo dies saving him. Determined to make Rolo’s sacrifice not go to waste, Lelouch reaffirms his intention to kill the Emperor.

Episode 20: Emperor Dismissed
Lelouch and Suzaku make their way to Kamine Island to face the Emperor. However, Suzaku is confronted by Bismarck Waldstein, while Lelouch enters the Sword of Akasha alone. There, he plans to imprison himself and his father for eternity.

Episode 21: The Ragnarok Connection
While inside the Sword of Akasha, Lelouch learns the truth about his mother’s death. Using Geass, Lelouch stops Ragnarok, which also kills his parents. A month later, Lelouch becomes the new Emperor of Britannia.

Episode 22: Emperor Lelouch
Lelouch defeats the Knights of the Round and secures his position as Emperor. However, Schneizel appears with his flying fortress called the Damocles, and destroys most of the Britannian capital. To make matters worse, he reveals that Nunnally has sided with him.

Episode 23: Schneizel’s Guise
Schneizel, along with the Black Knights and the remaining Knights of the Round, declares war upon Lelouch’s army.

Episode 25: Re;
Suzaku disguises as Zero, under the plan dubbed as Zero Requiem, and kills Lelouch during the execution. Nunnally becomes the Empress of Britannia, and the world begins an era of peace.