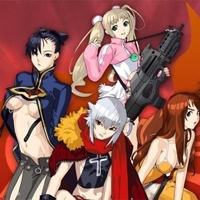 Crime happened almost every day and almost everywhere in Japan that the authorities had no choice but to approve of a law that allows citizens to carry firearms. The Recently Armed Police of Tokyo was created to eradicate this growing problem.
Kyohei Tachibana, a culinary student, hopes to be a pastry chef in France in the future. But then, four mercenaries asked him to be their cook and he’s forced to make a choice. With accepting this job, he ventures into a world of blood and crime.

Burst Angel is an anime series by Fumihiko Shimo. It was produced by Studio Gonzo under the direction of Koichi Ohata with 24 episodes that aired on April 6, 2004 until September 14, 2004. Burst Angel Infinity, an original video animation was released on March 23, 2007.

Episode 1: “Hell Comes Silently”
Kyohei, accepts a mysterious job for four young women who are under a special taskforce. Kyohei gets kidnapped during a job.

Episode 2: “The Heartless Gunfighter”
Meg gets kidnapped and Jo pursues with Kyohei. They managed to retrieve Meg in the most dangerous part of the town.

Episode 3: “City Where the Beast Howls”
Kyohei starts to have second thoughts with his job. Meanwhile, the girls are pursuing after a lunatic and gets involved in an experiment together with the lunatic’s brother.

Episode 4: “The Brothers Die at Dawn”
Meg gets trapped on a train together with the lunatic, Anthony Wong, and his brother, Jack Liang. Wong then turned into a monster. This monster wreaked havoc and Jo saves Meg.

Episode 5: “Mansion Where Lurks the Demon”
Meg goes undercover at a school and investigates an elite clique. She gets attacked by a monster.

Episode 6: “Wash this Garden with Blood!”
The students at the school where Meg went had been test subjects. One girl turned into a monster. Jo also goes to the school and kills the monster.

Episode 7: “Black Sky”
Meg gets abducted by a giant mechanized cow. This cow informs them that he is looking for a deadly nanobot virus that was apparently injected into Kyohei. Jo then gets Kyohei at gunpoint and they went to look for the cow.

Episode 8: “The Wounded Outlaw”
As their search for the cow continues, Jo and Kyohei are on a run. After resolving her differences with Sei, Jo defeats the cow.

Episode 9: “Party of the Dragon”
Sei agrees to a political marriage but the groom doublecrosses them. Meg’s chi is unleashed and Jei, Sei’s groom, and his men gets defeated.

Episode 10: “Uncharted Cyberspace”
Amy’s pictures are getting posted in cyberspace, so they went shopping for electronics. She defeats a group of “monitormen” that wanted her to join them.

Episode 12: “Tower of Tears”
Osaka was attacked. Planting a man in the Osaka police force, RAPT plans to take over their force. The man then captures Meg while Jo fights the cybot which attacked Osaka.

Episode 13: “Showdown in Osaka”
Meg is saved from a dirty cop by Takane Katsu. Takane and Jo joined forces and takes down the cybot.

Episode 14: “Wild Kids”
The history between Meg and Jo is revealed. Meg was a leader of a group of orphans and found an amnesiac Jo in the river.

Episode 15: “Slingin’ Oil”
The group goes to the beach. A flaming oil spill was caused by a giant squid and Jo takes it down.

Episode 16: “The Man with No Name”
Jo pursues a cybot and encounters a mute samurai. It was then revealed that the cybot Jo was pursuing destroyed the village under the samurai’s protection.

Episode 17: “Dueling Angels”
The mysterious cybot Jo was pursuing is piloted by Maria, a woman like Jo having special abilities. Their fight sends them to another reality. In this space, the samurai defeats the cybot. Sei then shows up in the middle of battle.

Episode 18: “The Immortal Classmate”
Kyohei bumps into a former schoolmate, Akio. Akio joined a yakuza and was turned into a cyberoid. Akio fought with his boss Eiji and they destroyed one another.

Episode 19: “24-Hour Strategy”
Takane and Leo visits a television drama filming but then, Takane goes berserk and faints soon afterwards. A glowing brain is seen controlling Takane together with Tokyo’s children. They were controlled to go after Jo’s group. Jo manages to destroy the brain and those controlled returned to normal.

Episode 20: “Blood Red Highway”
Takane is attacked on the freeway. The cybot who attacked him has a glowing brain that causes it to attack innocent civilians. It calls for reinforcements, but Jo, with her team, destroys them all.

Episode 21: “New Sheriff in Town”
RAPT was joined by Bailan. They then forced Sei to disband her group. The group was sent on a last mission to kill a mutated governor.

Episode 22: “Genocide Angels”
Jo gets captured, and her past gets revealed. She is discovered to be a bio-weapon. She, along with Maria, are survivors of a death match. Maria approaches Meg and kidnaps her and Jo.

Episode 23: “Red Sea Gallows”
Jo and Meg are taken to a ship. Jo and Maria duels, and Maria’s desire to kill Jo lessens. The trio then gets attacked by RAPT cybots and Maria gets ‘killed’.

Episode 24: “Angels, Explode!”
Meg gets knocked out by Jo. With Leo, Takane and Amy’s help, Sei and Jo take down RAPT. After a gun battle with RAPT cybots, the duo enters the RAPT HQ and kills RAPT’s head, they also destroyed the supercomputer. Along with the destruction of the supercomputer, the base explodes. A short while after, Meg awakens on a beach and learns of what happened. Leo, Takane and Amy’s fates are left unexplained.