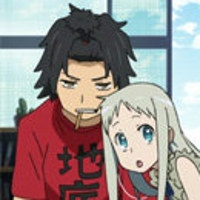 Due to an untimely death of one of its members, a once happy and playful group of friends drifted and grew apart. Living their lives separately from each other, they secretly blame themselves for the horrible accident, and never got to move on even after years had passed.

The story follows the former members of Super Peace Busters, in their mission to help Menma’s spirit pass on to the after-life, and their struggle with the guilt that has been gnawing inside them throughout the years.

AnoHana: The Flower We Saw that Day, is an anime adaptation of the romance drama manga under the same name, written by Mari Okada and illustrated by Mitsu Izumi. The anime series was produced by A-1 Pictures, and aired a total of 11 episodes between April and June 2011.

Jinta Yadomi
As a child, Jinta “Jintan” Yadomi was playful and energetic, and lead the group of his friends which he later named Super Peace Busters. After the untimely death of Menma and his mother, Jintan became withdrawn and isolated himself inside his home, even refusing to attend school. Eventually, the Super Peace Busters disbanded, and Jintan’s friends lived their lives separately.

Meiko Honma
Meiko “Menma” Honma, died at a young age after meeting a terrible accident. She appears to Jintan as a ghost, and although appearing to have physically aged, she has retained her childish and sweet nature. Menma continuously pesters Jintan, urging him to reconcile with the Super Peace Busters, and grant her “wish”, so she could be reincarnated and be with her friends again.

Naruko Anjo
Naruko “Anaru” Anjo, although appearing to be cold towards Jinta, still secretly admires him and cares for his welfare. Out of all the Super Peace Busters members, Anjo was the one who remained as Jinta’s friend, even bringing him his homework when he refuses to attend school. She feels jealousy towards Menma, as Jinta still thinks about her even when she already has departed.

Atsumu Matsuyuki
Atsumu “Yukiatsu” Matsuyuki grew to be a handsome and popular guy, but is still secretly mourning over the death of Menma. Just like the other members of Super Peace Busters, he blames himself for the accident, thinking that he caused Menma to run away after he confessed his feelings for her. He displays a hateful attitude towards Jinta, who claims that he can see Menma’s spirit.

Chiriko Tsurumi
Chiriko “Tsuruko” Tsurumi is usually a quite person, and sticked with Yukiatsu over the years. She secretly admires Yukiatsu since their childhood years, and kept the hairpin that was supposedly Yukiatsu’s gift to Menma. Despite feeling contempt towards Yukiatsu for not having moved on over Menma’s death, she still remains by his side and helps him whenever needed.

Tetsudo Hisakawa
Tetsudo “Poppo” Hisakawa has a happy-go-lucky attitude, and was the first to believe Jinta that Menma’s spirit is still around. He dropped out of school and travelled around the world, doing part time jobs to earn money and lived at their old secret base whenever he is home. Just like the other members of the Super Peace Busters, he blames himself for Menma’s death, as he was the only one who saw Menma fall down the river and die.

Episode 1: Super Peace Busters
The series starts with Jinta playing videogames alone in his home. He has stayed in his house most of the time, and refuses to attend school. Menma’s ghost appears to him, which he believes to only be a hallucination due to the summer heat. He later accepts the fact that it is truly Menma’s ghost, and is pestering him to reunite the Super Peace Busters, and her wish that she can’t seem to recall. Jinta decides to grant Menma’s wish and meets his old friends, only to find that no one believes him, except Poppo.

Episode 2: Menma the Hero
Poppo recalls that Menma once wanted a rare monster from a Nokemon game, and tells Jinta that it might be the wish she has forgotten. Jinta and Poppo set out to buy the game from a shop, where Anaru was working. Despite not fully believing Jinta, she decides to help them with the game with the condition that Jinta will attend school again. They proceed to Anaru’s house, where she kept an abundant collection of games and manga, which Menma’s spirit found delightful. They spent the entire night playing in order to obtain the rare monster Menma wanted, but it turned out that it wasn’t her “wish”. Earlier in the episode, it was revealed that Anaru blames herself for the events that lead to Menma’s death.

Episode 3: Menma Search Party
Jinta finally decides to attend school, only to be welcomed with insults by Anaru’s friends. Jinta changes his mind and heads toward their old secret base, where he meets Poppo claiming that he saw Menma’s spirit the previous night. Poppo sets up a “Menma Search Party”, where Yukiatsu attends, and claims that he too has seen Menma.

Episode 4: The White Dress with a Ribbon
The Menma Search Party begins, with the goal of finding Menma’s spirit in the woods where Poppo first saw her. Later in the episode, it was revealed to be Yukiatsu who was crossdressing, wearing the same clothes Menma wore back when she was alive.

Episode 5: Tunnel
Yukiatsu reveals in tears why he blames himself for Menma’s death. Menma uses Jinta to speak about things only she and Yukiatsu know about, finally convincing Yukiatsu that Menma’s spirit is really around.

Episode 6: Forget It, Don’t Forget
Jinta returns to school, only to find that the other students are gossiping about Naruko. He defends Naruko after seeing her being upset, and they both leave school and went to their secret base. With hopes to figure Menma’s forgotten wish, Jinta, Naruko, and Yukiatsu visits Menma’s house. They were welcomed by Menma’s mother, who gave them Menma’s diary which was written during their time as the Super Peace Busters.

Episode 7: The Real Wish
Jinta, Naruko, and Yukiatsu reads Menma’s diary, and learns that they once planned on making a firework, which was intended to send a letter to God asking for Jinta’s mother’s recovery. They decide to execute this plan once again, hoping that this would fulfill Menma’s wish. They start to work in order to earn money for the fireworks, but later the group was forbidden by Menma’s father.

Episode 8: I Wonder
Jinta and the others return to Menma’s home to ask her mother about the fireworks. Menma’s mother reveals that she resents the group, asking why they deserve to grow up except Menma. This results to a quarrel between Yukiatsu and Jinta, and Jinta decides to complete the fireworks plan alone. The group later reassembles at the secret base after receiving silent calls from Jinta’s home number while he was away. Menma makes solid evidence of her presence by making a new entry on her diary and dropping it on the floor for everyone to read.

Episode 9: Menma and Company
The group went to Jinta’s home, where Menma shows that she can interact with the physical world, although not being able to write on paper except in her diary. They decide to continue their work on the fireworks. Tsuruko’s jealousy towards Naruko is revealed, after eavesdropping on Naruko’s previous conversation with Yukiatsu.

Episode 10: Fireworks
In preparation for the awaited launch of the fireworks, the group held a party in the secret base. During the night of the party, the group relive the day of Menma’s death by pressuring Jinta to admit his feelings toward her, to which Jinta obliges. Naruko makes her way home broken hearted after Jinta’s answer, and meets Chiriko who expresses her own frustration, stating that Yukiatsu won’t choose her even after Menma is gone. Meanwhile, Jinta and Menma also head home. Jinta reveals to Menma that he doesn’t want her to pass on, and asks her to stay there with him forever. Menma refuses, saying that she wants to be reincarnated, so that she can be not only with Jinta, but also with the Super Peace Busters. On the day of firework launch, everyone was ready to fulfill Menma’s wish and knew that she would already disappear afterwards. Jinta does not accept that Menma will already leave him, and tries to stop the fireworks, but he was too late. After the successful launch of the fireworks, Jinta turns around to find Menma, who was still around and is admiring the fireworks.

Episode 11: The Flower Blooming on That Summer
The group finally realizes that Menma’s wish was not fulfilled due to their own selfish reasons. Each of them revealed that they had secretly blamed themselves for Menma’s death over the years. Jinta loses his ability to see Menma, but is able to hear her calling out to them. The group scatters and continuously calls out for Menma. Menma later appears to everyone, giving her final goodbye before finally moving on to the after-life.