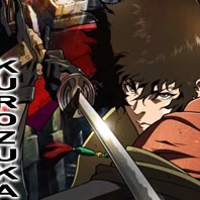 The series begins in 12th century Japan and centers on Kuro, a character based loosely on the legendary Japanese swordsman Minamoto no Yoshitsune. Kuro and his servant, Benkei, meet a beautiful and mysterious woman named Kuromitsu while on the run from Kuro’s elder brother, who seeks his life. Kuromitsu and Kuro fall in love, but he soon discovers that she harbors a terrible secret: she is a vampiric immortal. Following an attack by his pursuers, Kuro is badly injured and must imbibe Kuromitsu’s blood to save his own life. Kuro is then betrayed and attacked by Benkei, who has been subverted by a shadowy organization called the Red Army, and Kuro’s head is severed, which interferes with his transformation into a fully immortal being.

Kuro loses consciousness and wakes up centuries later in a post-apocalyptic, dystopian Japan. The surviving citizens have fallen under constant oppression by the Red Army, and Kuro is quickly found and recruited by an underground revolutionary movement called Haniwa. The remaining episodes follow Kuro’s fight with the Red Army and its host of elite warriors, who have been enhanced by samples of Kuromitsu’s blood, and his quest to find his inexplicably lost love.

The starting plot for the series is probably inspired by Kurozuka, a 1939 Japanese dance-drama, which features a man-eating ogress named Kuromitsu,2 as well as the life of Minamoto no Yoshitsune.

Anime Rating
8.7/10
171 users rated this.
Similar in these categories.