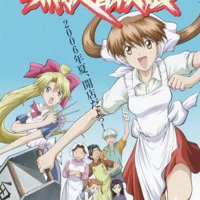 Both the anime and the manga are comedy shows detailing the adventures of Miki Onimaru, a teenage girl recently turned-twenty, whose mother runs a Chinese ramen restaurant. Miki works as the delivery girl for the shop, but frequently gets into trouble due to her boisterous, active personality. Much of the humor of the series derives from the characters’ over-the-top behavior and it contains parodies of other anime styles, such as those concerning fighting and rivalry.

Anime Rating
8.0/10
42 users rated this.
Similar in these categories.