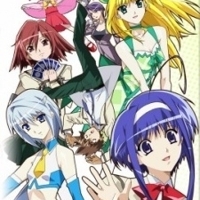 The story revolves around a typical high school boy named Kakeru Daichi and the can of melon juice soda that he bought from a vending machine. The can suddenly transform into a beautiful but standoffish girl in other words tsundere that Kakeru names “Melon” and more “Akikan” (“empty can”) girls appear. However, Akikan girls need to be infused with carbon dioxide in order to turn into a human.

Akikan is a Japanese light novel series about a group of anthropomorphic drink cans who do battle. It was created by Riku Ranjo, with illustrations by Hiro Suzuhira, known for her artistry in Shuffle. The first novel was released on May 24, 2007, and as of April 24, 2009, eight volumes have been published by Shueisha under their Super Dash Bunko label. A manga adaptation began serialization in Ultra Jump on October 18, 2008, an anime release of the first episode was streamed on the internet through Bandai Channel. On the day the final episode aired on March 28, 2009, an Akikan OVA followed on October 23, 2009. At Anime Weekend Atlanta 2011, Sentai Filmworks announced that they have licensed both TV series and OVA and was released in 2012.

Episode 1: Can You Feel It First Kiss
Kakeru Daichi purchases a can of Melon soda. Thinking it’s all dream, Kakeru acts perverted in front of this girl, before getting attacked by the girl’s powers. Kakeru ends up treating the can rather shoddily due to the conflict in behavior and leaves her in a cupboard before going to school. When he comes back though, he finds the girl drained of all life due to being low on carbon dioxide, so he kisses her to allow her to live. Kakeru decides to name the girl Melon. They are visited by a man named Hidehiko Otoyo who explains that the girlish cans are part of a battle called “The Akikan Elect” to determine whether steel cans or aluminum cans are superior.

Episode 2: During Studying Time
Kakeru notices that Melon doesn’t do much during the day, and decides she should go to school with him, where he introduces her as her cousin. When trying to find a place to put Melon back into a can, Kakeru enters a freezer room, and when Najima enters as well, they get locked in.

Episode 3: The Feelings Of An Empty Can
Kakeru and Melon are confronted a small aluminum Akikan named Budoko, whose powers come from her grape juice nature. While her primary attacks seem to have little effect on Melon besides annoyance, her explosive attacks are more dangerous. Melon gains the upper hand, but Kakeru breaks the fight up and Budoko escapes. Melon and Kakeru argue their different standings on the Akikan Elect. After some talking, Kakeru decides they will participate in the Akikan Elect, but they will always try to avoid fighting if necessary. While having a few drinks, Nejima gets drunk on carbonated drinks. When she goes to buy some more drinks, she drinks an energy drink which turns out to be an aluminum Akikan named Yell, stealing her first kiss.

Episode 4: Lost Running And Thinking
Yell is left behind at the vending machine, while Najima has gone home, where during her still-drunkenness, she asks Kakeru on a date for the following Sunday. The next day, Otoyo and Kizaki arrive at Najima’s house with Yell to explain the Akikan Elect. Both her and Kakeru are given scanners for detecting other Akikans, and Kakeru is informed that one of the owners goes to the same school as him. Najima tells Yell that she should go wherever she wanted, but she comes back wishing to stay with her owner, which Najima Accepts.

Episode 5: Dating Relationship
Kakeru starts to become curious about where the Akikan owner is, while Najima notices the ring tab on Melon’s ear. Later, Melon spots someone on a baseball game that looked similar to the Akian she fought, and they go off to investigate, visiting an amusement park and a baseball game, where it turns out the girl in question was just a spots drink vendor.

Episode 6: Deeply Touched Humans and Akikans
Melon arrives, tells Najima to go to Kakeru, and tells Yell to follow her to the baseball stadium where no bystanders will be hurt by their fighting. The fight between Melon and Yell reaches a critical point, with both of them reaching their limits, but Kakeru stops the fight and tells everyone to get along.

Episode 7: Transfer Student Welcome
Najima decides to enroll Yell into the class where she becomes popular with the class for announcing herself as a maid. Later on, the class plays a game of baseball, but neither Melon nor Yell can get a good grip on the rules and end up running around town. Jealous of her relationship with Najima, Yurika challenges Yell to a showdown, but Yell loses due to being distracted by Yurika’s bouncing breasts.

Episode 8:
Melon and Yell, as well as Goro and Yurika, decide to tail them, and Yell starts to feel uneasy seeing Najima with Kakeru. After giving him swimming lessons and going down a water slide together, Najima decides to take Kakeru on the Ferris Wheel, where she decides to make a confession to him.

Episode 9: The Moment Hearts Connect
Yell goes missing overnight and while Kakeru, Melon, and Najimi look for her, Melon becomes concerted about how close Kakeru and Najimi appear. When going over to Najimi’s house, Melon gets mad at Kakeru and runs off, and Kakeru notices she had written several unsent text messages saying she was lonely. Najimi manages to find Yell, apologizes and tells her she loves her and Kakeru mages to find Melon and play catch with her.

Episode 10:
Budoko is shocked to find a cat had messed up her hair while she was sleeping, only to find an opportunity to have some fun with a new hairstyle.

Anime Rating
7.3/10
678 users rated this.
Similar in these categories.