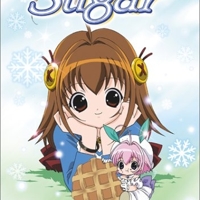 The story is based around 11-year-old Saga Bergmann, a young girl in a small German town called Muhlenberg (based on real town of Rothenburg ob der Tauber). Saga lives with her grandmother Regina and works in a coffee shop when not in school. Saga is extremely structured and plans her life down to the minute. One day, she notices a tiny creature in a fluffy outfit that appears to be starving. She offers it a waffle, which helps revive the tiny creature. Saga learns that this tiny creature is Sugar, an apprentice season fairy. Sugar explains that season fairies alter the weather by playing a magical musical instrument, and her specialty is snow, which she creates by playing the piccolo. Sugar is joined by two more apprentice season fairies, Salt, an outgoing male fairy who plays the trumpet to make the sun shine more brightly, and Pepper, a quiet and caring female fairy who plays the harp to make the wind blow.

All three apprentices are shocked at the realization that Saga can see them, since humans are not supposed to be able to see season fairies. Pepper speculates that exceptional humans might be able to see them, which is the best possible explanation. Sugar tells Saga that the three have been sent to Earth to train as full-fledged season fairies, and to do that, they must find ‘Twinkles’.

Sugar moves into Saga’s bedroom and sets up residence, much to the consternation of the super-structured Saga. Saga is a well-meaning, intelligent and highly-organized girl who feels compelled to look after the childish, loud and irresponsible Sugar, who is incapable of looking after herself. The story is complicated further with the arrival of three adult season fairies—Turmeric, a cloud fairy; Ginger, a rain fairy; and the Elder, the leader of the season fairies—and two more apprentices—Basil, a hail fairy, and Cinnamon, a thunder fairy.

With the highly disruptive presence of Sugar, Saga’s life goes haywire. Her friends Norma and Anne think that she is losing her mind, and her teacher, Miss Hanna, is worried that her best student is acting strangely. Not at all concerned with her strange behavior is Greta, an egotistical rich girl who considers Saga to be her rival, and Phil, a goofy inventor who keeps trying to persuade Saga to help him with his experiments, if he is not already busy building and trying out his latest device.

Anime Rating
7.7/10
426 users rated this.
Similar in these categories.