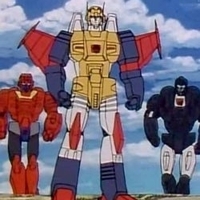 In ancient history two factions of the Transformers, the good-willed Autobots and the evil Decepticons, arrived on Earth to continue their endless battle. The Autobots managed to seal the Decepticons and invented the Pretender shells to live among humans to protect them if the evil forces return. The seal is broken in modern times and the Autobots recruit human warriors, equipping them with Transtectors to become the new Transformers.

Anime Rating
8.9/10
720 users rated this.
Similar in these categories.