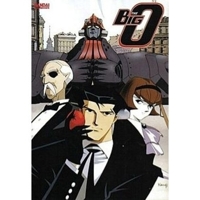 Set in a post-apocalyptic city called Paradigm City, where all of its inhabitants appear to have lost all their memories after a tragedy known as “The Event”. The city is governed by the Paradigm Corporation, and class inequity is evident. Although rare, androids are common enough to be considered normal and coexist with the human inhabitants of the city.

The story follows gentleman Roger Smith, who works for different clients across the city as a “negotiator”. When the situation demands for it, Roger calls upon the Big O, a giant robot which aids him in battle.

The Big O is an anime television series created under studio Sunrise, with Kazuyoshi Katayama as director and Chiaki J. Konaka as head writer. The series aired a total of 26 episodes (equally divided into 2 seasons) between October 13, 1999 and March 23, 2003. The first season was not very successful in Japan, but the series was saved by high international ratings.

Roger Smith
Roger Smith is the main protagonist of the series, and works as a negotiator at Paradigm City. His primary work is to negotiate anything for his clients. However, he appears to avoid deals involving the Paradigm Corporation, and only accepts them when the city is under direct threat. He is a gentleman and a professional, thus he expects others to behave professionally as well. The following are several rules that he and those involved with him must observe, respectively ordered as they were revealed in the series:
I have a special house rule that only lovely young women can unconditionally enter this mansion.
If you stay [in my house], then you wear black.
It’s not my style to carry a gun.
I value women and the elderly. It’s one of my policies.
If someone lacks courtesy and sincerity, I ask them to leave.
The most important rule of all is under no circumstances must anyone touch my desk!
The basic rule of negotiating is to consider and respect the other person’s feelings.
If you want to live a happy life in this city, leave memories alone when they pop up. That’s Roger Smith’s Rule No. 1.
You have to use your pent-up energy to fight through the harshness of reality. That’s Roger Smith’s Rule No. 2.
A Negotiator only uses force as a last resort.
Something else that goes against my policies—using violence against women.

R. Dorothy Wayneright
R. Dorothy Wayneright is an android hired as Roger’s personal assistant. Being an android, she has enhanced human capabilities, proving to be very useful for Roger’s missions. Her abilities include: superhuman strength, increased leap distance, incredible sense of balance, improved coordination, and much more. She also has an unexplained connection between several megadeuses including the Big O.

Norman Burg
Talented and resourceful, Norman Burg works for Roger as Big O’s caretaker and as his butler. Aside from his primary duties as butler, Norman is capable of wielding different types of gun, prepared to defend the Smith household in the case that it will be attacked.

The first season is episodic, and follows Roger’s work with different clients.

Episode 1: Roger the Negotiator
Known as the top negotiator of Paradigm City, Roger Smith is hired to retrieve R. Dorothy Wayneright, abducted daughter of the wealthy scientist Miguel Soldano. However, Roger discovers that Dorothy is not a human, but an android that replaced her dead human counterpart. Later, after Roger helps Dorothy go to her now deceased father, a giant robot known as Dorothy – 1 is overpowering the military police as it attacks the bureau building. Roger summons his own megadeus known as Big O from underground and successfully stops Dorothy – 1 from infiltrating its target.

Episode 2: Dorothy Dorothy
Piloted by Jason Beck, Dorothy – 1 reemerges and wreaks havoc in Paradigm City. Roger Smith returns with his Big O, and managed to gain the upper hand. However, he discovers that Dorothy is attached to Dorothy – 1 and is being used as its power regulator, restricting him from completely destroying his enemy. Roger decides to exit his megadeus unprotected and pulls Dorothy from Dorothy – 1, effectively disabling the latter. Now without his megadeus, Beck is arrested. Dorothy is then hired to work for Roger Smith, following her father’s death.

Episode 3: Electric City
Roger Smith is hired by Paradigm City’s power management representative, to check on Electric City after several power outages. After arriving at Electric City, Roger discovers that the locals refuse to use the hydroelectric powerplant due to the belief that an angry god resides within the lake. Later, he discovers that an old man created a creature known as the Eel, and that it was responsible for consuming the dam’s electricity. Roger Smith uses the Big O to battle the Eel, but is almost defeated by it. He then destroys the powerplant to disable it from being reactivated in the future.

Episode 4: Underground Terror
Roger Smith is hired to find Michael Seebach, a journalist who has been missing for the past three months. He discovers later on that Seebach has been living a double life as Schwarzwald. His search leads him to an underground abandoned subway, where he was paralyzed by fear after seeing ghosts. Thanks to Dorothy, Roger was able to snap out of his fear and proceed deeper into the subway. They finally find Schwarzwald, along with an abandoned megadeus named the Archetype. Roger calls upon the Big O after the Archetype was activated to attack them.

Episode 5: Bring Back My Ghost
Roger is hired by a blind wealthy old woman to help her search for her missing son Bonny Fraiser. Unknown to her, Bonny Fraiser has died at the Hudson River from a war one year past. Big Ear informs Roger that three high rank soldiers have already died near the river, after seeing a ghostly figure in the thick fog. Roger arrives with the Big O after the failure of the military police’s attacks. He discovers that Bonny is still alive, and has used a ghost megadeus called Osrail to create the ghastly illusion. Bonny explains that he was betrayed by Gauss during the war, and was saved by Osrail after he jumped into the river. Bonny visits his mother on the night of her birthday.