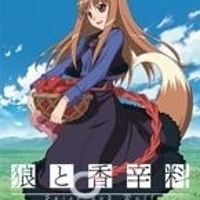 While visiting a town a peddler named Kraft Lawrence meets the local god known as Holo the Wise Wolf. She asks if he would take her to her home up north and many adventures happen along the way. Kraft Lawrence alongside Holo the Wife Wolf learn much about the economics of the world they live in, with money taking a central role. Kingdoms produce their own currency, yet one kingdom is making their coins lighter and worth less silver. This could signal the decline of a kindgom, a future war, or something far more sinister.

Money and economics play a huge role in the show, and experienced trader Kraft Lawrence thinks he can teach Holo, but it turns out she has many tricks of her own that he never expected. Her age and god intuition makers her incredibly useful in his dealings, preventing him from getting scammed and helping him turn a tidy profit.

But still, lurking in the shadows, are the motivators behind the changing currency.