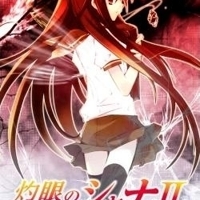 Shana, and Alastor Lord of the Crimson Realm, continue to do battle with the Denizens, who are trying to steal the Power of Existence from mortals. In the last battle, Yuji is revealed to be a mystes, a “torch” of nearly unlimited Power of Existence. Since the Denizens want to capture Yuji and use him to upset the balance of the Realm, Shana resolves to protect Yuji. Yuji then vows to join Shana in her fight.

Episode 1: The Second Time
The new semester starts. Yuji is put to sleep by a Denizen, and dreams about the past. However, as soon as Yuji realizes that he is only dreaming, the spell breaks and he awakens to find Shana in a battle against Mare.

Episode 2: The Beginning of Everything
Yuji trains under the supervision of Alastor and Wilhelmina. They then discover that Yuji’s Power of Existence has been increased because of Hecate. Meanwhile, Shana is busy learning how to make home-made melon bread for Yuji. Later, Mare returns and attacks Yuji once again.

Episode 3: The Suspicious Transfer Student
Fumina Konoe, who strongly resembles Hecate, transfers into Yuji’s class. In order to make sure that it is not Hecate, Shana uses a seal. Later, a Denizen appears before them.

Episode 4: The Distressed Girls
Yuji, together with Ogata, hang out with Konoe to make her used to school life. Meanwhile, Shana and Kazumi become jealous with the attention Konoe gets from Yuji.

Episode 5: The Family Dinner Table
After taking an advice from Chigusa, Wilhelmina tries to make a home-made meal for Shana.

Episode 6: Eve of Trouble
After their teacher announces a surprise exam, Ogata suggests to his classmates that they stay overnight at their house to study. Margery Daw advises Ogata and Kazumi about love, which also helps Shana gain her confidence back.

Episode 7: Hayato Ike, His Day of Glory
Ike organizes an outing at an amusement park, but everything goes terribly out of plan.

Episode 8: The Door to the Past
Yuji continues his training, and manages to defeat a Rinne summoned by Wilhelmina. Meanwhile, Satou returns and asks Margery Daw to train him. The latter declines, and tells them about her past involving a boy who was a Flame Haze.

Episode 9: The Milestone of Sorrow
Shana teaches Yuji with how to cast a Seal. Later, Yuji surprises Shana and Alastor after casting a Seal with silver flame. They remark that the object of Margery’s revenge also had a silver flame.

Episode 10: The Man Who Returned
Yuji wonders about his silver flame. Meanwhile, Shana notices a mysterious man who has suddenly appeared in their area. Later, the man is revealed to be Yuji’s father, who then advises her and Kazumi about their affections for Yuji.

Episode 11: The Promised Pair
The students are busy preparing for the upcoming cultural festival. Later, Wilhelmina explains to Shana and Yuji the origin of the Midnight Lost Child. It is revealed that it was created by the Crimson Lord Pheles, with the purpose of ensuring that her lover Johan will stay by her side forever. She then proceeds to warn Yuji about Pheles’ possible return.

Episode 12: The Clear Autumn Festival Begins
Shana and the other students enjoy the cultural festival. Meanwhile, Wilhelmina discusses Yuji’s silver flame with Margery. Later, Shana wins the best costume award, and she plans to confess her love to Yuji while on stage. However, a tornado suddenly appears, and is revealed to be caused by Pheles’ return.

Episode 13: Convergence, Then an Omen
Margery goes on a blind rampage after seeing Yuji’s silver flame. Meanwhile, Shana is occupied in battle against Pheles, who wants to take the Midnight Lost Child from Yuji.

Episode 15: Awakening
The Silver within Yuji awakens due to Pheles. Johan is freed and is reunited with Pheles, who then promises that she will not go after the Midnight Lost Child again.

Episode 16: Everlasting Love
The festival ends without any more disruptions. Konoe seems to have disappeared from everyone’s memories. Before leaving, Pheles gives Yoshida a secret Treasure Tool, which has the ability to summon her. However, the human who uses it will have their Power of Existence used.

Episode 17: Respective Paths
Yuji is slowly learning swordsmanship thanks to Shana. Later, Tanaka decides to leave Satou and Margery to live a normal life with Ogata.

Episode 18: The Intricate Yuji
Yuji is unusually enthusiastic, while Chigusa suddenly gets ill. Later, a Denizen appears in Misaki City.

Episode 19: Matters That Could Not Be Said
Yuji is attacked by Zarovee. Tanaka secretly informs the Flame Hazes. Yuji uses his silver flame to take care of the cloned Denizens, while Shana and Wilhelmina fight the Wanderer in time.

Episode 20: The Scarlet Death Struggle
The Destructive Blade Sabrac appears. It is then revealed that Sabrac was once Wilhelmina’s enemy.

Episode 21: Merging Powers
Sabrac appears to be too powerful, and almost defeats Wilhelmina. However, Yuji devises a plan to severe his energy reserves, and Sabrac finally falls to Nietono no Shana.

Episode 22: Christmas Eve
Shana and Kazumi write a letter to Yuji, asking him to choose between the both of them. Later, Hecate appears and removes the Midnight Lost Child from Yuji.

Episode 23: The Early Movements of Peril
Bal Masque’s secret weapon is revealed, the Statue of Pride. It has Konoe’s memories as its brain, while the Midnight Lost Child as its heart. Meanwhile, Shana, Wilhelmina, and Margery rush to save Yuji.

Episode 24: That Which Must Be Protected
Yuji fights with his Blutsauger, but his Power of Existence is depleting. Meanwhile, Shana is being held back by the members of Bal Masque.