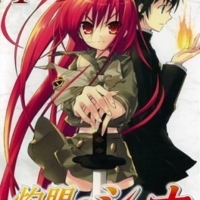 Set in the city of Misaki, Japan, Shakugan no Shana (Translated as Burning-Eyed Shana) is a story involved in the disputes of those from a parallel universe called the Crimson Realm. It largely focuses on Yuji Sakai, an average Japanese high school boy, who gets thrown in the Crimson Realm’s conflict by the accident.

The story begins on an ordinary day in spring where Yuji Sakai is walking peacefully on his way home from school. But, while walking the busy streets of Misaki, a not so ordinary event unfolds in his path. A strange blue light starts to shine from the ground and everything around him, including other people, become frozen. This causes Yuji to panic.

Out of nowhere, a strange and gigantic creature in the shape of a baby appears before him. As it shows itself, people who were frozen still were suddenly engulfed in a blue flame. The creature then opens its mouth, causing the frozen people to disappear into flame, which is then consumed by the creature. While all of this is happening, Yuji notices one of his classmates from school, Yukari Hirai, being engulfed by the blue flame.

In a fit of worry, he shouts Hirai’s name loudly, catching the creature’s attention. Being unfrozen in a sealed world, Yuji is then suspected by the creature to be a Mystes – a rare type of a Torch species with treasures in them. Excited to see a rare being, the creatures hurriedly grabs Yuji in its hand and prepares to eat him alive. But before it could feast on him, something mysteriously attacks the creature, cutting off its arm and allowing Yuji to be free from its grasp.

Without sparing any second for the creature to react, a mysterious girl with blazing red hair and eyes holding a Katana kicks it backward. Yuji is surprised by the sudden appearance of his savior. The girl observes his figure and then speaks to a brown pendant wrapped around her neck. Surprisingly, the piece jewelry spoke back to her.

The creature, now with its arm severed off, becomes enraged and dashes towards the mysterious girl. In response to this, the girl wields her Katana and returns the creature’s invitation for a fight. But despite its advantage in size, the creature is no match for the girl’s power and speed. The creature’s body disappears as soon as the Katana’s blade strikes it, but their fight did end there. The girl’s talking pendant then tells her that it was not the real body of the creature. She looks around her and instantly dashes towards Yuji with her blade, causing Yuji to close his eyes in fear.

As soon as Yuji opens his eyes, he realizes that the girl was not aiming for him, but something else behind him. Another creature in the form of a young lady falls down on the ground with its arm severed. It glares at the red haired girl, observing her physical appearance. After which, the creature reveals the identity of the girl as the Flame Haze of Alastor, The Flame of the Heavens— Shana. A quick exchange of arguments come between the two, with the girl ready to claim the life of the creature.

Once the Flame Haze Shana readies her Katana for a hit, Yuji becomes compassionate for the creature and runs in between the two of them in order to stop the attack. But unfortunately for him, the creature stayed in its wicked place, piercing its hand in his back and into his body. Yuji feels an immense pain, unable to move as he feels the creature’s hand trying to grab something inside him. But this was put to a halt when Shana swings her blade and slices his left shoulder.

Strangely, Yuji finds himself unable to bleed despite the deep cut in his body. This ultimately scares him. In addition to that, Shana takes no important notice to him as she is busy discussing odd yet seemingly important matters with her talking pendant. But, being human, Yuji panics despite his inability to bleed, annoying the Flame Haze Shana. She then approaches him, grabbing his cut part and attaching it back to its rightful place. Yuji is then healed after a blue flame engulfs him for a short moment. Shana then restores everyone who was consumed by the creature earlier. Once she finishes this, everything that was frozen in place starts to move again and everything is back to normal as if nothing had happened.

Yuji then sees Hirai, his classmate, and calls out to her. But, Hirai gives no response and continues to walk away. Suddenly, a small blue flame appears on Hirai’s back. Yuji starts to notice other the same tiny blue flame on other people around him.

At the corner of his eye, he sees the Flame Haze Shana walking, only this time, her blazing red hair and eyes have changed into a dark brown color. Not knowing what else to do, Yuji demands an explanation on what had happened and what was now going on. Worried about the past events, Shana’s pendant orders her to tell Yuji the whole truth.

It was then revealed that Yuji was no ordinary human being and that there were others just like him. Those that he saw with visible blue flames within their bodies were replacements of people who have vanished after their existence were eaten by the so-called Denizens of the Crimson Realm. These replacements were called Torches. The Flame Haze Shana tells Yuji that the real him had already gotten its existence eaten and is no longer alive. Yuji, upon hearing the truth, realizes that there is a blue flame inside him, similar to the other people he saw.

After finding out that he was already dead, the ordinary life which Yuji had always lived with began to change from then on.

THE CRIMSON REALM AND ITS BACKGROUND

The Crimson Real is a universe parallel to the human world which is inhabited by beings called the Guze no Tomogara or Crimson Denizens. The Denizens are able to control an energy source named Sonzai no Chikara (Translated the Power of Existence) which is found in any living organism. But not all Denizens have equal power. A hierarchy of power exists among their race. Those who have a greater amount of strength compared to other Denizens are entitled as Lords or Guze no O, and those who are even more powerful are called Kami or Gods.

In the human world, a balance exists that of which the Denizens can disrupt by taking away the Sonzai no Chikara of humans for their own gain. But amid the number of Denizens who do this, there are those who wish to preserve the balance in the human world. These Denizens, which are most likely Lords, come in contact with humans and make them into Flame Hazes. A Flame Haze is a human who has the role of protecting the world’s balance by stopping and defeating Denizen’s which threaten the balance. A spell called Seal is used to freeze the world in place – allowing only Denizens and Flame Hazes to move within it.

Once the Flame Hazes destroys the menacing Denizen, they restore the damages done and create Torches— a replacement of the human’s whose Power of Existence have been taken by the Denizens. These Torches were created because if those humans were to suddenly disappear without explanation, it would disrupt the balance of the human world. In order to lessen the impact of the humans who had their Power of Existence taken, a replacement – or Torch is provided in their place.

But not all Torches are the same. One rare and special kind of Torch called a Mystes – like Yuji, can move within a seal and have a treasure tool inside them. The treasure tool is a magical item made by the Denizens that enables one to use remarkable powers and abilities without limit.

Yuji Sakai, the male protagonist of the series, is the seemingly ordinary high school student around the age of 15 to 16 years old. For as long as he can remember, Yuji has lived a quiet peaceful life until he encounters a Denizen and meets Shana. From then on, he discovered that the real him had already died some time ago and that he was only a replacement – called a Torch. But Yuji is not a normal type of Torch, and instead, is a Mystes that holds a special treasure tool. The treasure tool inside of him is the Reiji Maigo or Midnight Lost Child which enables Yuji to replenish his Power of Existence every day during midnight.

Personality wise, Yuji is the type of person who puts others before himself. He is kind to other people and is often helpful to them. Although this is a good quality, his helpfulness has put him in danger at times – one being the time when he first encountered a Denizen. Aside from this, Yuji likes to carry all burdens and hardships by himself so that others would not suffer for it. He appears to be an average Japanese student having dark black hair, brown eyes, and wearing his high school uniform.

Shana is the series’s female protagonist who is a Flame Haze in contract with the Flame of Heaven, Crimson God Alastor. When she was just a child, Alastor had already claimed Shana is “The Great One” who is destined to be a significant person in the future. After becoming and performing the duties of a Flame Haze, Shana has been recognized by those in the Crimson Realm as “Flame-Haired Red Eyed Hunter” due to her blazing red hair and eyes.

Before meeting Yuji, Shana did not have a name. Yuji had given her the name “Shana” based on the name of her sword. Initially, Shana was solely focused on doing her duties as a Flame Haze and had a cold and strict personality. But because of Yuji’s determination to make her feel human again, she slowly develops a warmer side.

Although she is described to be having fiery red hair and eyes, Shana’s appearance changes when she does not use the power of the Flame Haze. Her hair becomes a jet black color and her eyes turn into brown, just like any other ordinary Japanese girl. While being a Flame Haze, Shana wears a black outfit and carries her Katana around with her.

Alastor, otherwise known as the Flame of the Heavens, is a Crimson Realm Lord which Shana is in contract with. He is one of the lords which prevent and stop greedy Denizens from taking Power of Existence. Alastor comes in contact usually with Shana using the Cocytus – a divine vessel in the shape of a pendant.