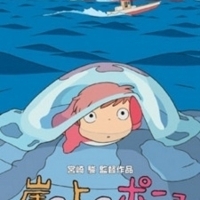 This heart-warming story by famed and beloved director Miyazaki centers around Ponyo, a tiny fish-girl who dreams of being human. Reminiscent of classic story “The Little Mermaid”, she is washed ashore and rescued by a young boy, Sosuke, but despite their friendship she simply has to return to the oceans. Undeterred, Ponyo later uses a spell to transform into a human girl, unaware of the dire consequences of the powerful magic she uses.

Sosuke, a young 5-year old boy and the son of a sailor, lived on a quiet hillside with his mother, Lisa, for years, until discovering a goldfish trapped in a bottle on the beach. But this was no ordinary goldfish; it was the aforementioned Ponyo! Ponyo, herself being the daughter of a sea goddess and a powerful wizard, falls in love with the young boy, her rescuer. Sosuke’s life quickly becomes a little less quiet, and a lot more exciting, as Ponyo’s father uses magic to find her.