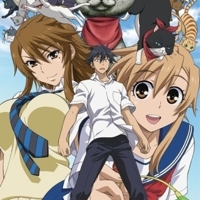 Junpei Kousaka is second-year high school student who is allergic to cats, making him hate anything and everything that has to do with them. Unfortunately for him, he is surrounded by cat-lovers; his family, his estranged childhood friend, and worse of all, her all time crush, Kaede Mizuno.

While walking home one day, Junpei tried kicking an empty can into a nearby trash bin, but hits and breaks the local neko-jizou-sama (guardian deity of cats) instead. As consequence for what had happened, Junpei was given a curse – he can now understand cat speech. To make things worse, he had to keep this a secret, or else anyone who will know about his predicament will also be cursed.

Now he must fulfill a hundred wishes from cats to lift the curse, or else he would turn into a cat himself and die. Left with no other choice, Junpei begins his mission to fulfill one hundred cat wishes, with the help of their very own ill-tempered family cat Nyamsus.

Nyan Koi! is an anime adaptation of the harem, supernatural manga series written and illustrated by Sato Fujiwara that initially started as a web comic. Produced by AIC studios, the anime series aired a total of 12 episodes between October 1, 2009 and December 17, 2009.

Junpei Kousaka
Junpei Kousaka is just another high schooler trying to get through life, but is unfortunately cursed after destroying a sacred cat statue. He is allergic to cats, but ironically, everyone around him are cat-lovers, including his crush. Despite his hatred for cats, he was the one to convince her mother to adopt Nyamsus, who was left on their doorsteps. Nyamsus then accompanied Junpei in his task to complete requests from a hundred cats.

Kaede Mizuno
Cute, athletic, book-smart, but airheaded, Kaede Mizuno has infatuated many people, including Junpei Kousaka. Her family owns four dogs, but she personally adores cats more. Unfortunately, the cats always avoid her, due to the smell of dogs she is carrying, and because she tends to become overenthusiastic in handling them. Kaede meets Junpei for the first time when she fell on him from a tree, after trying to save a kitten that she thought was stuck. Being an airheaded and oblivious girl that she is, she does not immediately notice that Junpei has hidden feelings for her.

Kanako Sumiyoshi
Kanako Sumiyoshi was initially Junpei’s childhood friend. However, they became distant after a misunderstanding: Kanako thought that Junpei was giving away the doll she gave him to another girl, where in fact he was just showing it off. Since then, she wore manba makeup, which she later removed after she and Junpei reconciled.

Nagi Ichinose
Nagi Ichinose is heir to a powerful yakuza family in Kyoto, and is the senior of Kaede in their track team. After getting rejected by her crush who thought she was a guy due to her masculine demeanor, she decided to become more boyish. She has a phobia involving lightning, after witnessing his grandfather being struck in several occasions. She secretly admires Kaede, who she pesters by groping her breasts. However, later in the series, after spending time together with Junpei, she slowly falls in love with him. She even resorts to extreme efforts, just to be with Junpei. Such when she forced to be with Junpei’s class, despite being advanced a year more than them.

Nyamsus
Nyamsus is a large and fat cat owned by Junpei’s family. Apparently, Nyamsus is prominent among the neighborhood cats, and she is viewed as an older sister figure. She is responsible for conveying the requests of the other cats for Junpei. Despite appearing to be grumpy, she cares for Junpei’s welfare, and acknowledges that if not for him, she might not have had the life she is enjoying now.

Episode 1: The Scruffy Cat & the Cursed High Schooler
Junpei accidentally destroys a sacred cat statue, and was cursed to fulfill the requests of a hundred cats as a consequence. Now having the ability to understand cats, he sets out with their family’s cat Nyamsus to fulfill their first request. They end up in a local park, where they find stray cats who were regularly tormented by a stranger. Later, Junpei finds out that the stranger who torments the stray cats was no other than his crush Kaede, who was extremely fond of cats that it comes to a point where she smothers them.

Episode 2: That Man Is a Manservant?
Junpei receives a request from a caba cat, who wants to thank a girl who had helped him. However, this girl turns out to be Kanako, his childhood friend who still hates him. After the events resulting from Junpei’s attempt to fulfill the cat’s request, Kanako and him are reconciled, and they become good friends again.

Episode 3: Your name is…
Junpei meets Chizuru Mochizuki, a postwoman who ironically has no sense of direction. Junpei decides to help her around her way in town, and also helps several cats along the way. Unfortunately for him, his friends saw him with the woman roaming around the town together, creating misunderstandings.

Episode 4: Beautiful People
Junpei receives a challenge from Nagi Ichinose, who passes out three days later from stress due to Junpei ignoring her. Junpei, Kanako, and Kaede take the unconscious Nagi to her home, which turns out to be a huge mansion owned by Yakuza. There, he meets Nagi’s cat, who makes a request to make Nagi fall in love.

Quick Review
While the story is not particularly outstanding, it gives just enough to keep you hooked and entertained. The characters are interesting in their own ways, and most of their scenes are hilarious. Although this is a harem, do not expect to see tear-jerking romance. The animation throughout the series is well drawn, and the music accompaniment also does a great job. Overall, while it does not have particularly excellent qualities, it is still an entertaining comedy harem to watch.