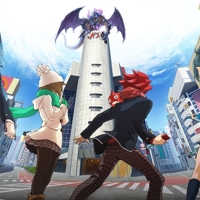 A web anime adaptation of Monster Strike premiered on October 10, 2015 on YouTube. It tells the story of Ren Homura, a middle school student who moves back to his hometown with his mother and sister, but he apparently cannot remember much of his life there. After having to get his cellphone repaired, he finds that the repairman installed Monster Strike onto it, and he later is attacked by a man who forces him into a real life game of Monster Strike, summoning a monster from within the game to attack Ren. Ren manages to summon a monster of his own, the diminutive dragon Oragon, and with help from his classmate Aoi Mizusawa, as well as an alterego awoken by his own missing memories, Ren defeats the man’s monster, seemingly freeing him from the control of an evil entity. This brings Ren into the world of the town’s Monster Strike Stadium leagues, where people play Monster Strike in what appears to be real life but are advanced holograms, as well as Aoi’s desire to reunite her friends Akira Kagetsuki and Minami Wakaba into becoming a team of Monster Strike players. However, Akira will not play on a team because Ren is nothing like their former fourth member Haruma, and the air-headed Minami has become possessed by the same evil presence that forced other people to attack Ren and Aoi.

Anime Rating
8.5/10
65 users rated this.
Similar in these categories.