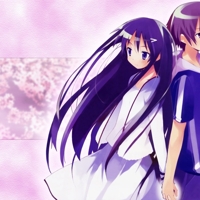 After catching an infectious disease called hepatitis A, Yuuichi Ezaki had been confined to a hospital away from his friends and family. Bored to death, he developed a habit of sneaking out of the hospital, which usually ends with him getting beaten up by his nurse.

One day, Yuuichi meets Rika Akiba, a girl who is also hospitalized in the same hospital. Their friendship slowly blooms into love, but is challenged by Rika’s death that was just waiting outside the door.

Hanbun no Tsuki ga Noboru Sora (Looking Up at the Half-Moon), also known as Hantsuki, is an anime adaptation of the romance light novel under the same name, written by Tsumugu Hashimoto and written by Keihi Yamamoto. Produced by Group TAC, the anime series aired a total of 6 episodes between January 12, 2006 and February 23, 2006.

Episode 1: Akiko-san, the Girl and Ryūnosuke Akutagawa
Tired by Yuuichi’s nightly habit of sneaking out, Akiko, his nurse, barricades his door to prevent him from leaving his room. However, Akiko offers Yuuichi for a chance to lift her restriction, given that he will manage to befriend a fellow patient. Soon enough, Yuuichi meets Rika Akiba, a patient from the eastern ward who spends most of her time reading Ryuunosuke Akutagawa’s works. With the help of Akiko, Yuuichi pretends to have the same interests as Rika, but the latter easily sees through the former’s façade. In exchange for her forgiveness, Rika asks Yuuichi to take her to Mount Houdai, the same mountain her father hiked before his death. Rika insists on going despite her weak condition, for she believes that climbing the mountain will rid her fear of death.

Episode 2: The Inheritance of the Tada Collection
Tada, a perverted old patient, had died earlier in the day and left Yuuichi his enormous pornography collection. Despite Yuuichi’s efforts in hiding his inheritance, Rika soon learns about it and becomes furious. He immediately tries to apologize, but Rika only responds with pranks and resentful actions. Yuuichi ends up being locked by Rika at the hospital roof, which made way for his first meeting with Dr. Natsume after falling ill. Apparently, Dr. Natsume had been Rika’s physician for the past six years, and had only transferred to this hospital for Rika. He expresses his surprise about Rika’s behavior, as she had not told anyone about her illness or even made a friend prior to meeting Yuuichi. Dr. Natsume then wittingly devised a trap by giving a pornographic magazine to Yuuichi, just in the right time Rika would catch him. Later, Yuuichi and Rika finally comes to friendlier terms. However, they get into an argument once again, after Rika told Yuuichi that she only apologized because of Dr. Natsume’s influence.

Episode 3: The End of the Ezaki Collection
With the help of his friend Tsukasa, Yuuichi manages to recover the book Rika threw at him during their argument, but catches a fever due to the rain. Rika visits Yuuichi and they reconcile. Soon after Yuuichi recovers from his fever, he decides to burn his inheritance from Tada, hoping that Rika would be pleased by doing so. Rika then lends Yuuichi her copy of “Night in the Galactic Railroad”. Meanwhile, Dr. Natsume is discussing with Mrs. Akiba regarding Rika’s worsening condition. That night, Yuuichi finds Dr. Natsume drunk. Dr. Natsume declares that Yuuichi’s friendship with Rika will not last, causing Yuuichi to accuse him of jealousy, and their argument turns into physical tension. Later, after reading the Night in the Galactic Road, Yuuichi realizes what really made Dr. Natsume upset, and laments the fate that awaits Rika.

Episode 4: A Single Day of School Life
After Rika expresses her desire to have her photos taken, Yuuichi returns home to find a camera, together with his nurse Akiko. Later, while her photos are being taken by Yuuichi, Rika asks him about school, and tells him that she had never been to one. Yuuichi, wanting to fill this particular void in Rika, decides to take her with him at school. With the help of Yuuichi’s friends, Rika borrows a schoolgirl’s uniform and pretends to be a student. They successfully enter the school, but soon enough a teacher catches them. The teacher is then knocked unconscious by the boys. While inside a classroom, Rika reveals to Miyuki that she no longer fears death, but requests to keep this a secret from Yuuichi. Yuuichi and Rika then returns to the hospital, where a punishment awaits them. While sitting out their punishment together, Rika hands Yuuichi a book titled Les Thibault, with a restriction that he should only read it after she tells him to do so. Suddenly, Rika faints.

Episode 5: One Frozen Minute
Rika is admitted into ICU, and Yuuichi is only allowed to secretly visit her for one minute. Misako, a friend of Akiko, encounters a depressed Yuuichi and tries to seduce him. Fortunately, Akiko learns about this and immediately beats Yuuichi. She then orders him to keep this from Rika, as it could contribute to Rika’s worsening condition. The next day, Dr. Natsume finds Yuuichi on the rooftop, and comforts him. He reveals that he had been in the same position before, when his wife was dying from cardiomyopathy. He also tells Yuuichi that throughout the years, this was the first time Rika was willing to undergo operation. Before the operation, Rika gives her permission for Yuuichi to read the book. While nervously waiting for Rika’s operation to be completed, Yuuichi reads Les Thibault. He then discovers that it was a confession of love from Rika, and that she was willing to risk her life for a chance to be with him.

Episode 6: Our Two Hands
Rika survives the operation and was well enough to be able to return to the eastern ward. However, Yuuichi had been prohibited from visiting her. Dr. Natsume confronts Akiko about how her optimism had blinded Yuuichi, and the possibility that Yuuichi might suffer the same way he did with his wife. Yuuichi secretly overhears this conversation, and rekindles his desire to stay with Rika, whatever melancholy may await him. With the help of his friends, Yuuichi forces his way to Rika’s room, and promises her that he will stay with her no matter what. After the credits, the two are seen together in Mount Hodai once again, and share their first kiss.

Anime Rating
8.0/10
269 users rated this.
Similar in these categories.