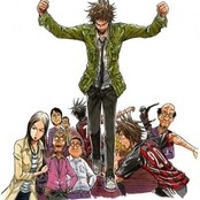 When Takeshi Tatsumi left East Tokyo United, the team went into freefall and were eventually relegated from the top Japanese soccer league, resulting in a succession of coaches and player sales that have the team’s fans ready to snap. Several years later, Takeshi returns to coach the team he once played for and save the team from further humiliation.

In Giant Killing a ragtag bunch from East Tokyo are struggling in Japan’s top football league. The team is going through an abysmal spell right now where they are nearing the bottom of the table and have lost 5 matches in a row. The loses haven’t done much to team moral, because it was already low. Fan support, on the other hand, is looking bleak. In the world of football, once the fans turn on a team the end is near. Teams don’t recover. Coaches are fired, players are sold, and teams drop to smaller divisions where profits often prevent them from ever being successful against even mediocre top division programs. East Tokyo United, ETU, can only blame their coach right now. And Coach is ready to give up this next game to prove to his team and fans, that against the biggest club in the nation he can make this team win.

Anime Rating
8.3/10
135 users rated this.
Similar in these categories.