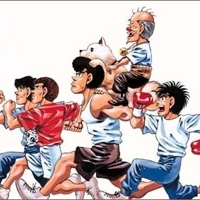 Ippo Makunouchi is a timid but hardworking boy who spends most of his time helping his mother with their charter fishing business. Ippo mostly kept to himself in school, and was always picked on by bullies as a result.

One day, when Ippo was being beaten up by his bullies as usual, a jogger who was passing by rescued him. Since the jogger cannot leave Ippo with his injuries, he took the kid to their gym, as it happens the he is a professional boxer.

With his wounds treated, Ippo wakes up to the sounds of the boxers training, and instantly felt awe and admiration. Mamoru Takamura, the boxer who saved Ippo, tried to cheer the boy up by letting him vent his anger on a sandbag which had his bully’s face on it. Ippo punched the sandbag with a surprisingly strong force, catching the attention of Takamura.

After thinking about the boxing gym and with what had happened, Ippo finally decides to take action on his dream of being stronger. He declares to Takamura that he wants to be a professional boxer, and begs Takamura to train him. Takamura, who was uncertain of Ippo’s determination gave the kid a challenge, to which Ippo was able to complete. Impressed, Takamura accepts to train him, and thus Ippo’s journey to the top of the boxing ranks begins.

Ippo Makunouchi is the main protagonist of the series. During his childhood, he spent most of his time helping his mother with their charter fishing business, which greatly contributed to the development of his lower body’s strength. Due to working most of his time off school, he only had few friends, and was frequently picked on by bullies. Ippo always wanted to change himself and be stronger, but he never found the passion to take action. His life’s direction turned when Takamura saved him from his bullies, and showed him the world of boxing.

Ippo is known to be a strong puncher, and has three signature punches, namely: a liver blow, Gazelle punch, and the Dempsey roll, inspired by punches used by Mike Tyson, Floyd Patterson, and Jack Dempsey respectively. In addition to this strong punches, he possesses a high stamina, excellent balance, and an unwavering fighting spirit. All these elements combined allow Ippo to last long in matches, and has become particularly known for his comeback victories.

Before Takamura became a renowned boxer, he was known to be a delinquent who got involved in a lot of street fights, leaving his opponents with serious injuries. One time after his brother was jeered by fans in a rugby game, Takamura initiated a brawl which injured twenty people. This action was not tolerated by his parents, and he was disowned. He continued to fight brawls on the streets, until he crossed paths with coach Kamugawa, who saw his potential for boxing.

His natural talent in fighting made him an undefeated two-time World Champion, and even singlehandedly knocked out a bear with his fists. Despite relentlessly teasing and bullying the other gym members, Takamura is looked upon as an inspiration and as a leader. He is described to be the best pound-for-pound fighter, and is the ideal blend of athleticism and technique. Despite his prodigious talents, he does not slack off and trains relentlessly instead. He holds a record of 24-0-0, 24 wins that all were by knockout.

Masaru Aoki is Takamura’s best friend, and were both the toughest thugs around during their time in high school. Due to being always rejected by the popular girls in their school, Aoki developed a taste for the less outstanding ones. Outside boxing, he works in a ramen restaurant, and shares an apartment with her girlfriend.

Masaru Aoki, along with Takamura, provide comic relief in their gym, always being goofy and silly. He has an unconventional fighting style, which involves techniques like the double punch, a look away punch, an untorqued corkscrew punch, and most notably the Frog Punch. He has a record of 11-6-4 with 6 wins by knockout, and has reached 1st rank in the lightweight division.

Along with Takamura and Aoki during their delinquent years is Tatsuya Kimura, a collected type and romantic person, but also trains as hard as anyone. Outside of boxing, he works at his family’s flower shop.

His boxing style involves agile footwork and a fast left, which is described to have no weakness, but without a distinct strength either. Before his match against Ryo Mashiba for the Jr. lightweight championship, he developed a destructive vertical combo known as Dragon Fish Blow. He has a record of 17-5-3 with 8 wins by knockout, and has reached the 3rd rank in the Jr. lightweight division.

Genji Kamogawa is the head coach and founder of Kamogawa gym, where Ippo and the others train. Despite not showing it, Kamogawa shares a strong bond between his boxers. Kamogawa’s vast knowledge and experience makes him an excellent coach, and he continuously encourages his boxer’s will power.

During his younger years, Kamogawa fought as a prizefighter in Japan shortly after the end of World War 2. Along with others, they pioneered the fighting style which emphasizes the application of scientific theories. Kamogawa was described as a fearsome boxer, especially with his double-edged Tekken “Iron Fist” blow, which was a left hook to the body.

Ichiro Miyata is a talented outboxer who specializes with counter punches, and is admired by Ippo as an idol. His father was also a boxer, who was forced to retire. Since then, he decided to use his father’s boxing style in order to prove its effectiveness in the boxing ring. He initially trained in the Kamogawa gym, where he first met Ippo. He underestimated Ippo at first, but his opinion quickly changed. Although he won his first spar against Ippo, he won unexpectedly given a hard fight despite his opponent’s inexperience. After losing his second spar to Ippo, he developed a friendly rivalry against him and decided to leave the Kamogawa gym, with hopes that they will meet in an official boxing match someday.

His boxing style specializes in counter punches, he has excellent speed, technique, and game sense, but he has a weakness which is his jaw. His tall frame gives him a hard time to stay in his weight division, often having to undergo rigid weight management. This makes a big impact and drains most of his power and stamina. Miyata currently holds an impressive 23-1-1 record, where 21 are won by knockouts, and is the reigning OPBF Featherweight Champion.

Episode 1: The First Step
Ippo Makunouchi is introduced. Takamura rescues him from his regular bullies, and takes him to a boxing gym after sustaining injuries. After witnessing how boxers trained and watching the boxing tapes Takamura gave him, Ippo becomes inspired and begs to be trained. He was given a challenge by Takamura, which he should complete in a span of 1 week.

Episode 2: Fruits of Labor
Despite having to balance school and helping his mother, Ippo relentlessly worked on the challenge given to him. He was tasked to catch 10 falling leaves, which he handled with using only one hand. Takamura declares that he will train Ippo from then on. His first spar was coming, and it was against a skilled rookie named Ichiro Miyata.

Episode 3: Tears of Joy
The spar between Ippo and Ichiro commences. Due to Ichiro’s wider experience than Ippo, he takes control of the spar. He dishes out a lot of punches, even knocking Ippo twice. Takamura advices Ippo on what to do, and continues the spar against his dominant opponent. His resiliency and durability shows, as he continues to take even more hits from Ichiro. Despite having held out for a considerable time, Ippo finally losts to Ichiro’s superior skills. However, the head coach was able to witness this fight, and decides to train Ippo every day in the gym after seeing his potential.