Darker Than BLACK: Gemini of the Meteor [TV] 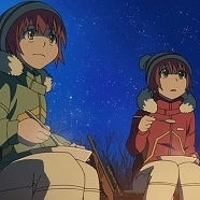 Hei and Yin are now on the run after betraying the Syndicate in the previous season. After leaving Japan, Hei encounters Suou Pavlichenko, a 13-year-old Eurasian girl who becomes embroiled in the war and politics of the various factions and Contractors vying for power.

Meanwhile, Hell’s Gate remains standing in Tokyo, after Hei’s efforts to stop the Saturn Ring anti-gate particle weapon from activating. Although Contractors are safe from the danger of having their existences erased, this does not prevent new and old Contractors from abusing their powers. Misaki Kirihara resigns her position in Foreign Affairs to pursue her own investigations into Hei and the contractors.

Episode 1: Black Cats Do Not Dream of Stars
Suou Pavlichenko watches a meteor shower with her twin brother and their father. However, the supposedly magical moment turns into a disaster, when a meteor crashes near their location. Although surviving the incident, Shion becomes a Contractor, and is locked away inside their home for safe keeping. Meanwhile, his father Dr. Pavlichenko researches about his condition. Later, Hei reappears in Russia after an FSB squad tries to abduct Shion.

Episode 2: Fallen Meteor
Mina Hazuki attacks Hei, right before Hei can obtain the meteor fragment from Suou. Suou hides with Nika from the FSB agents, after she has been mistaken for Shion. Later, Hei realizes that Suou is not Shion, but abducts her anyway for their own objectives. Later, Misaki Kirihara is seen looking towards the star of BK-201 through a telescope.

Episode 3: Vanishing in a Sea of Ice
The energy coming from the meteor fragment destroys the trap devices holding Hei. Despite slightly stunned from the sudden blast, Suou manages to push Hei and herself into the sea. They both wake up in a hut, and decide to leave Vladivostok together. With the help from Nika, Hei and Suou attempts to escape through the train station. Meanwhile, an MIAC official named Kobayashi offers Misaki to join them, and tells her that BK-201 is alive.

Episode 4: The Ark Adrift on the Lake
Hei and the others arrive in Sapporo, taking shelter in an abandoned part of the city. Since Suou had obtained Contractor powers, Hei decides to train her. Misaki accepts the MIAC’s offer, and is assigned to the black ops division Section 3, with the alias Yayoi Ichinose. She then sends an informant to investigate Hei’s condition. Later, Madame Oreille confronts her at the abandoned National Observatory, who claims to know her real name.

Episode 6: An Aroma Sweet, a Heart Bitter
Hei is occupied in a battle against Genma, while Misaki leads Section 3 to transport Izanami to the Greater Tokyo Area. Mao orders July and Suou to take down the container housing Izanami, but is interrupted by Hei when he realizes that Yin was inside. They then escape Sapporo. Yin’s spectre appears before Suou several times.

Episode 7: The Doll Sings in the Winter Wind
Repnin complains about Dr. Pavlichenko’s corpse, after seeing a picture of him well and alive in Tokyo. Misaki learns that the MIAC is tapping her communications, after meeting up with Genma at the abandoned National Observatory. Meanwhile, July is abducted by Hei’s ally who was supposedly going to help them escape from Sapporo. Later, a Russian agent named Ilya Sokolov appears, who wishes to detain Suou and the others. Fortunately, Hei arrives to rescue them, despite almost losing to Ilya’s powers. Repnin covertly watches their moves.

Episode 8: Twinkling Sun on a Summer Day
Suou is confronted by Tanya, while Hei is intercepted by Repnin’s men. Repnin invites Hei into the FSB, and reveals to him that Izanami has the ability to push Contractors to commit suicide. Hei declines his offer, and attacks him instead. With Suou, they defeat the FSB forces. Later, Suou, Mao, and July set off to Tokyo without Hei.

Episode 9: They Met One Day, Unexpectedly
En route to Tokyo, Suou collapses from a high fever. She wakes up in a bedroom and meets Gai Kurasawa and Kiko Kayanuma, who offer to help her find her mother in Tokyo. Later, Suou finally meets her mother at an airport. However, her mother refuses to believe that she is Suou, and firmly says that Suou had already died 8 years ago. Meanwhile, Misaki receives instructions from Amber, informing her that Hell’s Gate will open after Izanami meets Izanagi.

Episode 10: Your Smile on a False Street Corner
Suou’s mother recounts to Misaki about what had happened 8 years ago. She took Suou and her twin brother Shion to visit Dr. Pavlichenko when the disaster occurs. Shion reveals that he has the ability to clone any object or organism, although with a few imperfections. Hei rejoins the group, while Mina vows to kill him after seeing Youko’s bloody corpse.

Episode 11: The Sea Floor Dries Up, and the Moon Grows Full
Hei decides to leave again to settle his own problems. Suou decides to do the same, and heads out to find his father. Together with Mao and July, Suou meets Dr. Pavlichenko at an abandoned aquarium. There, Dr. Pavlichenko reveals to Suou the truth about the meteor incident. Meanwhile, MIAC forces draw closer into the aquarium. Fortunately, Suou and the others manage to escape. Later, Suou disappears.

Episode 12: Ark of Stars
The American forces have launched a military operation to secure the Greater Tokyo Area. Genma then reveals that he is a CIA, being a double agent all along. Misaki and the rest of the MIAC attempt to prevent total destruction. Meanwhile, Shion meets with Suou at Hell’s Gate.