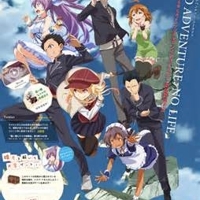 On the “Special Student Zone” artificial island – Nanaejima, the story centers on a beautiful, optimistic, but NEET (not in education, employment or training) girl Nanana Ryugajo, who was mysteriously killed in her own apartment.

Ten years later, a boy named Juugo Yama was forced to transfer to a high school on the island. With only a certain amount of money to live on, Juugo chooses a low-rent apartment that happens to be haunted by the ghostly Nanana, who is bound to her former home and unable to move on. Juugo and members of the school’s adventure club join a “treasure hunt royale” on the island for the Nanana Collection, a treasure that possesses a mysterious power.

Nanana’s Buried Treasure was written by Kazuma Otorino with art by Akaringo. Enterbrain published seven of the volumes, and it is also published under Famitsu Bunko, with the first volume released on August 30, 2013. An adaptation by Hitoshi Okuda began serialization in Enterbrain’s Famitsu Comic Clear online magazine starting at the beginning of 2012. An anime television series adaptation by A-1 Pictures started airing in April 2014 on Fuji TV’s noitamina block.

Anime Rating
7.6/10
160 users rated this.
Similar in these categories.