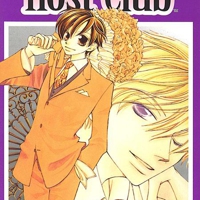 Ouran Academy is a prestigious school for super-rich students. Haruhi Fujioka is a commoner who had been given the chance to get a scholarship from the school. While looking for a quite place to study, she finds an unused music room and thought it would be enough for her to study in peace. Little did she know that it was a club room for the Ouran High School Host Club. The manga goes a little further than the anime.

Inside the room, she meets a bunch of handsome guys who are part of the host club family. The host club consists of 6 members. Tamaki Suoh, Kyoya Otori, the twins Kaoru and Hikaru Hitachiin, Morinozuka Takashi and Haninozuka Mitsukuni.

After being mistaken for a guy and surrounded by weird people, Haruhi has accidentally bumped into one of the host clubs priceless vase. Because of this, Haruhi got quite nervous and asked how she could pay for the vase which costs 8,000,000 yen. Kaoru and Hikaru told her if she’s able to pay it because she can’t even buy their uniform set that costs 300,000 yen.

So the leader of the host club, Tamaki, told Haruhi to work it off. And thus, Haruhi was forced to be the host club’s dog until they graduate. She became an errand ‘’boy’’ for the host club until Hikaru removes the glasses Haruhi was wearing. Tamaki immediately ordered them to get things. Hikaru and Kaoru gave Haruhi a pair of the school’s boy’s uniform. They noticed something when Haruhi forcefully push them out of the dressing room.

After Haruhi changed, Tamaki immediately had her graduated from being the host club dog to an official host club rookie member and must designate 100 customers in order to pay off the debt she owes. Everything is going smooth until jealousy creeps in from one of Tamaki’s customers towards Haruhi because Tamaki has taken a liking to her and treat Haruhi as his son. The girl began bullying Haruhi like throwing her bag on the fountain and designated her to make it like she attacked the girl. Hikaru and Kaoru splashed water on them. After the commotion, the girl was kept out of the host club and Haruhi must now gather 1000 designations.

Because of what Hikaru and Kaoru did, Haruhi was given another set of uniform but this time it was a uniform set for the girls. Tamaki was shocked to see her dressed as a girl. Kyoya was the first one who knew Haruhi was a girl but didn’t say anything because it’s fun. The twins, Hani and Mori knew on the process. Tamaki started to get smitten over Haruhi and Kyoya thinks that it may be a start of a new love story.

Haruhi Fujioka- Haruhi is the main protagonist of the series that was mistaken for being a guy because of her get-up on the first day of school. She is a bookworm and goes to Ouran in order to fulfill her dreams to follow on her late mother’s footsteps on becoming a lawyer. Haruhi’s personal quote is ‘’damn rich bastards’’ Tamaki refers to her as her son and Kyoya is the mother. Her title is the Natural Rookie.

Peronality:
Haruhi is quite mature for her age and is very very intelligent and. No wonder she got the Ouran scholarship. She needs to maintain her grades so she can keep her scholarship. She is independent and sometimes gets annoyed with her club mates.

Haruhi has short dark brown hair and big beautiful eyes. She was mistaken for a guy do the the way she dressed on the first day of school. Often seen wearing Ouran’s uniform for boys and get dressed as a girl on some occasions. She has previously long hair with hime-cut bangs but she cut it because some kid put a gum on it and it was bothersome.

*Character Trivia: Haruhi loves Ootoro so much and she’s dying to have some.
She also has a fear of thunder and addresses herself as ‘’ore’’

Tamaki Suoh- Tamaki is Haruhi’s upperclassman and the host club founder. He’s the one who made Haruhi join the host club because of the vase she broke. His title is the host club’s prince.

Peronality: Tamaki is a big narcissist. But he is also kind-hearted and passionate about helping other people in need. This is why his clubmates love him so much. He is quite noisy and would always throw tantrums.

Kyoya Ootori- One of the co-founders and is Tamaki’s best friend. He is the one who manages the host club income and funds and his family owns a lot of hospitals and private police.

Personality: Kyoya is a smart student who also values his education. He is the opposite of Tamaki. Kyoya is a cool type character. His title says so too. He won’t do anything unless he gains merit from it.

Appearance: Kyoya is a tall guy that looks good when he’s wearing casual and formal outfits. He has black he wears glasses all the time. He is calm and collected.

*Character Trivia: Kyoka bought his father’s company on the end of the series.

Hikaru and Kaoru Hitachiin- The devil type of the host club. They are Haruhi’s classmate and her greatest problem.

Personalities: Hikaru and Hikaru are both evil, but also funny. They like jokes and kids around all the time but they can also get serious. Hikaru is one step meaner than Kaoru as Haruhi commented.

Appearance:
They have messy auburn hair but for people to distiguish them, Hikaru’s hair is parted on the right while Kaoru is on the left. When not wearing their school uniform, the tend to dress stylish outfits.

Characters Trivia: Only Haruhi can tell them apart.

Haninozuka Mitsukuni- One of the oldest club members but is the shortest and the cutest of them. He is the loli-shota type. His nickname is Honey-senpai.

Personality: He acts cute and childish but he is actually intelligent and observant. He is very cheerful and has quite the sweet tooth. His mood may change whenever he is disturbed from his slumber. He likes cute things.

Appearance: Mitsukuni is very short and has a baby face but he really is handsome whenever he gets serious. His hair is short and honey-blonde colored.

Character Trivia: They adress him as Honey-senpai.
-Is a big eater of cakes.

Morinozuka Takashi- The wild type of the host club. He is a man of few words and is Mitsukuni’s cousin. His clan has been serving the Haninozuka clan for many generations before marriage joined the families. Mori still serves Mitsukuni and tend to his wishes.

Personality: He only speaks when needed and he can give advice to others whenever possible because of his mature and observant nature. He is very loyal and protective of Mitsukuni.

Appearance: Mori is the tallest of all the club members. He has dark hair and gray eyes and his looks and his figure makes him look more wild.