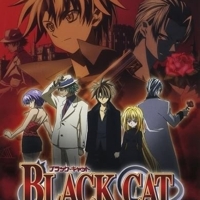 However, his rigid worldview was twisted, after meeting a mysterious bounty hunter in the name of Saya Minatsuki. Influenced by his newfound friend’s positive outlook towards life, the once mindless killer decides to travel down a more noble path. He abandons his role as the Black Cat, and becomes a virtuous bounty hunter. Unfortunately for Train, leaving the life of a mercenary is not as easy as he thought. Chronos, especially his possessive underling Creed Diskenth, did not approve of Train’s sudden decision, and vows to bring him back no matter the cost.

Watch Train Heartnet struggle free from his life as a mercenary, and how he fights a war where the world’s peace and order hang in the balance.

Black Cat is an anime adaptation of the action adventure manga series under the same name, written and illustrated by Kentaro Yabuki. Produced by studio Gonzo, the series aired a total of 24 episodes between October 6, 2005 and March 30, 2006. Its manga counterpart has been hugely successful, selling over 12 million copies in Japan.

Train Heartnet
Train Heartnet was a ruthless and efficient mercenary during his years working as an assassin for Chronos. 10 years prior to his mercenary life, Heartnet was orphaned after Zagine Axeloake murdered his parents. Zagine took Hearnet and trained him to become a deadly mercenary, indoctrinating him that only the strongest survive. He wields a gun he calls Hades, a black and gold revolver made out of Orichalcum. Being made out of the strongest metal, he can use his gun to deflect bullets and guard him from attacks. Heartnet has a 20/20 vision, helping him become an excellent marksman, even being able to shoot down fired bullets mid-air, or hit the exact same point with several bullets. He has a move called “Black Claw”, where he fires his gun to accelerate his spin mid-air and leaving large slash marks on the ground.

However, after meeting a Sweeper (Bounty Hunter) named Saya, Train Heartnet began to question his direction in life, and decided to never kill again. He leaves Chronos after Creed murdered Saya, and became a sweeper to avenge her death.

Sven Vollfied
Initially, Sven Vollfied worked as an inspector for the International Bureau of Investigations, alongside with his partner Lloyd Goldwynne. His partner possessed a rather unique talent, where his eyes could see a few seconds into the future. On one of their assignments, the partners were attacked by a crime family, where it ended up by Sven losing his right eye, and Lloyd sacrificing his own life to save his partner. Sven receives Lloyd’s eye, granting him the ability to peek into the future. However, this strained his body, sometimes to the point that Sven collapses.

Sven Vollfied becomes a sweeper, and ends up partnering with Train Heartnet. Due to Train’s capricious nature, they are often dragged into trouble. Sven’s main talent lies in his genius, capable of creating innovative equipment, including bombs and special bullets for train. After his regular pistol was destroyed, Sven created the Attache Weapon Case, a suitcase equipped with hidden weaponry inside.

Eve
Eve is a genetically cloned, bio-engineered human war machine with the help of nanotechnology. She has the ability to reconstruct her body for offensive and defensive purposes, and can regenerate at a high rate. She usually transforms her arms into blades, hammers, and shields, or grow wings on her back in order to fly. Designed to become the ultimate soldier, Eve was raised as an emotionless killing machine.

She was later saved by Train and Sven, who were the first ones to treat her like a human being. Due to this, Eve slowly grew into a human, and developed even more during her time accompanying Train and Sven on their missions.

Rinslet Walker
Rinslet Walker is a skilled thief-for-hire, who employs Train and Sven for a heist. She claims to be able to steal anything even under the heaviest security, and can manipulate anyone to follow her will. However, this does not work with Train, although she can make him participate in some of her schemes. Walker decides to remain working with Train and Sven, and treats Eve like her little sister. Despite owning a gun, she is not as effective in using it as her partners.

Creed Diskenth
Creed Diskenth is the main antagonist of the series. After being severely abused by his mother, Creed developed a sinister and twisted personality. He lived on the streets, after killing her mother and the police. Eventually, he ended up partnering with Train Heartnet, who he admired to the point of obsession. This was why Creed killed Saya, because he wanted to bring back Train into his previous life. If not for his mental instability, he would have been given the position that was awarded to Train.

He becomes leader of the Apostle of the Stars, which he claims that its only purpose is to destroy Chronos. However, his real goal is to obtain immortality with the help of nanotechnology, and rule the entire human population.

Using his Tao powers, he manipulates his sword to form the powerful “Imagine Blade”. In its weakest form, the Imagine Blade is an invisible sword that can extend up to 80 meters. At its next level of strength, the sword becomes sentient with a mouth and eyes that directly reflects Creed’s emotions, powerful enough to destroy Orichalcum. At the third level, the sword merges with his arms, with the eyes on his shoulder, and another arm extending from his back. In its final and most powerful form, the it transforms into a colossal blade made out of light.

Story:
The story isn’t particularly written badly, but it could have improved much more, if the pacing was revised. It started out solid, but as the story progressed, especially in the ending, the plot became rushed.
Animation:
Same for the story, the animation was satisfactorily made.
Sound:
The sound did a great job, being able to accompany the animation, and enhancing whichever mood it was complementing.
Characters:
Every character is unique, and contributes really well to the given plot. Different personalities are shown in the series, which generally makes it more fun and entertaining to watch.