The Secret World Of Arrietty [Movie] 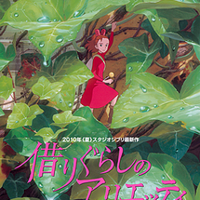 A boy named Sho/Shawn tells the audience he still remembers the week in summer he spent at his mother’s childhood home with his maternal great aunt, Sadako/Jessica, and the house maid, Haru. When Sho/Shawn arrives at the house on the first day, he sees a cat, Niya/Nina, trying to attack something in the bushes but it soon gives up after it is attacked by a crow. Shawn then discovers Arrietty, a Borrower, emerging from the bushes and returning to her home through an underground air vent. Later at night, Arrietty’s father, Pod, takes Arrietty on her first “borrowing” mission above the floorboards to show her how he “borrows” sugar and tissue. After obtaining a sugar cube from the kitchen, they walk within a wall to reach a beautifully intricate dollhouse (with working electric lights and kitchen utilities) in Sho/Shawn’s bedroom, to get tissue. However, Arrietty is spotted by Sho/Shawn while retrieving a piece of tissue from a tissue box and loses the sugar cube. Sho/Shawn asks her not to leave and although Arrietty hesitates, she still leaves the room with her father.
The next day, Sho/Shawn leaves the dropped sugar cube beside the underground air vent where he first saw Arrietty. Pod warns Arrietty not to take it because their existence must be kept secret from humans, but his daughter nevertheless sneaks out to visit Sho/Shawn in his bedroom. She drops the sugar cube he left on the floor, letting him know that she is there. Without revealing herself otherwise, she tells Sho/Shawn to leave her family alone and that they do not need his help. On her return, Arrietty is intercepted by her father. Realizing they have been detected, Pod and his wife Homily decide that they must move out of the house. Sho/Shawn learns from Sadako/Jessica that some of his ancestors had seen Borrowers in the house, and had the dollhouse custom-built in the hopes that Borrowers would use it. The Borrowers had not been seen since, however, and the dollhouse stayed in Sho/Shawn’s room.
Pod returns injured from a borrowing mission and is helped home by Spiller, a Borrower boy he met on the way. He informs them that there are other places the Borrowers could move to. While Pod is recovering, Sho/Shawn removes the floorboard concealing the Borrower household and replaces their kitchen with the kitchen from the dollhouse, in hopes the Borrowers would be more accepting of his knowledge of their existence. However, the Borrowers are frightened by this and instead speed up their moving process.
After Pod recovers, he goes to explore some of the places Spiller has suggested. Arrietty goes to bid farewell to Sho/Shawn, but in the course of conversation he suggests to her that the Borrowers are becoming extinct. Realizing that he has upset his small friend, Sho/Shawn reveals he has had a heart condition since birth and will have an operation in a few days. The operation does not have a good chance of success. He believes that there is nothing he can do about it, saying that eventually every living thing dies. Arrietty convinces Sho/Shawn that he will fight for the life he has now nevertheless.
Meanwhile, Haru notices the floorboards have been disturbed. Sadako/Jessica is out and Sho/Shawn is still in the garden speaking with Arrietty. Haru unearths the Borrowers’ house and captures Homily. Alerted by her mother’s screams, Arrietty leaves Sho/Shawn in the garden and goes to investigate. Saddened by her departure, Sho/Shawn returns to his room. Haru locks him in and calls a pest removal company to capture the other Borrowers alive. With the help of Sho/Shawn, Arrietty rescues Homily. Sadako returns soon after the pest removal company’s arrival and sends them away. Haru and Sadako/Jessica discover that the Borrowers have left, and that Sho/Shawn has destroyed any trace of their presence.
The Borrowers stop for dinner during their move, and Sho/Shawn’s cat, Niya/Nina, spots Arrietty. Niya/Nina leads Sho/Shawn to Arrietty. He gives her a sugar cube, and tells her the Borrowers’ fight for survival has given him hope to live through the operation. Arrietty gives Sho/Shawn her hair clip as a token of remembrance and they go their separate ways. Arrietty, Pod, and Homily leave in a teapot with Spiller. Spiller comforts Arrietty by giving her a red berry after she joins him on the teapot’s top.