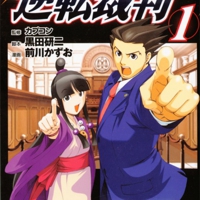 This manga focussed on Phoenix Wright and unlike the Phoenix Wright: Ace Attorney – Official Casebooks previously published in English, this series is episodic and features extra cases set in an indeterminate point in the games timeline. Although, presumably sometime after Phoenix Wright: Justice For All as Franziska features in some of the later volumes. As one would expect, as well as new characters, the series also features existing characters such as Maya,

Edgeworth, Winston Payne and Larry.
In a semi-ambiguous timeline, Phoenix Wright has to once again defend his friend Larry Butz in a murder trial.

Manga Rating
8.2/10
95 users rated this.
Similar in these categories.