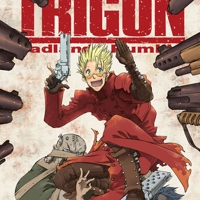 Trigun: Badlands Rumble is a 2010 film by Madhouse. It is based on the Trigun manga, written by Yasuhiro Nightow.

The movie opens with a bank robbery orchestrated by the titanic, towering thief known as Gasback. As a thief, he only pulls off the most difficult heists that offer the biggest rewards. Gasback’s trio of henchmen, however, are tired from the increasing danger and expense of each successive job and decide to seize the winnings from this latest heist, kill Gasback and retire to a life of luxury. When Cain, the leader of the trio goes to fire the killing shot, his gun is mysteriously knocked out of his hand…