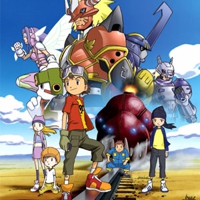 Digimon Frontier introduces a new universe in the Digimon fandom. Five kids from the Real World have been called to the Digital World to acquire the “legendary spirits” to save the Digital World from one of the 3 Holy Angels, Cherubimon, who has revolted against the other two. Takuya, the hero, Kouji, the loner, Izumi, the girl, Junpei, the comedic relief, and Tomoki, the little kid, are the 5 Chosen Children from the Real World that have to use the legendary spirits to “Spirit Evolve” into the legendary warriors themselves. Can they unravel the secret behind Cherubimon’s rebellion before his own legendary warriors take them out? Written by SA-kun <RyouAkiyama@aol.com>

Digimon Frontier is about five kids, Takuya, Izumi, Junpei, Kouji, and Tomoki, who find their way into the Digital World, and discover they can turn themselves into Digimon with the help of certain spirits. Known to be one of the most anticipated seasons of Digimon yet, Digimon Frontier has a variety of new characters. Firstly, Takuya Kanbara, the new goggle boy. Secondly, Izumi Orimoto, a girl of Italian descend. Thirdly, Kouji Minamoto, a boy who doesn’t make many friends due to his fathers job. Then there is Junpei Shibayama, another boy, whom Izumi takes a quick liking to. The final Scanner is Tomoki Himi, a boy who is always teased by his brother and his brother never played with him so he plays on the computer more often. All of these kids make up the new team that is chosen to save both worlds. Written by Chris Kelley <kitagawa_kenta@hotmail.com>

Digimon Frontier has to do with 5 children being called to the digital world. Takuya is the new goggle head and leader. Koji is the loner. Zoe (Izumi) is the only girl. JP (Junpei) is the mood maker of the group. Tommy (Tomoki) is the little kid who loves computers. Koji has a brother, Kouichi Minamoto, is the evil Digimon “Duskmon”. The children can “Digi-volve” into their digimon. There is a level higher than Mega! It’s called Hybrid! Written by A.C