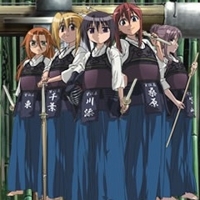 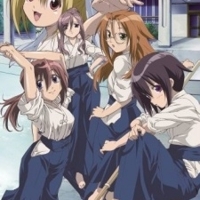 Toraji Ishida is a high school kendo teacher. His friend and fellow kendo teacher makes him a bet: if Ishida can assemble a girl’s kendo team that can defeat his girl’s team in a practice match, he’ll treat Ishida to free meals at his father’s Sushi restaurant for an entire year. Now Ishida must find five girls to join the team.

Bamboo Blade is a Japanese manga series written by Masahiro Totsuka and illustrated by Aguri Igarashi. It was serialized in Square Enix’s Young Gangan Magazine from December 3, 2004, to September 3, 2010. The series tells the story of Toraji Ishida, a luckless high school Kendo Instructor, who is challenged by his former upperclassman, also a kendo instructor, to a competition between their female students. The best inspires Toraji to gather and train a team of five girls, where he meets Tamaki Kawazoe, a gifted female kendo practitioner

Episode 2: The Blade Braves and Boxed Lunch
Tamaki’s motivation is presented in the form of her TV superhero, Blade Braver. Miyako Miyazaki, Yuji Nakata, Danjuro Eiga join the club. Tamaki’s relationship with the other club members develops when they start having lunch together and sharing their boxed lunches.

Episode 3: Black and Blue
The club members go shopping for protective gear. After trying on their protective gear, Kojiro nicknames Tamaki “Red”, the leader of the kendo club’s female team, Kirino is nicknamed " Yellow", and Miyako is nicknamed “Pink”. The fourth female member of the kendo club, Sayako Kuwahara nicknamed “Blue”, is revealed and has a painful first encounter with Miyako’s “Black” personality. Kojiro will nickname the last female club member “Green”.

Episode 4: Pink and Blue
Miyako learns that the girl she had thrown in the lake the previous day was actually her senpai in the club, this leads her, in her “Pink” personality (different from her “Black personality), to awkwardly try to hide her identity from Sayako to avoid any confrontations.

Episode 5: Muroe High and Machido High
The day of the match arrives, however, due to the unique personalities of its members, the Machido High Kendo is awfully delayed. The real match starts very late in the episode, and the episode ends with the Machido High Club members awed by Tamaki’s ability, after scoring a point in the first battle.

Episode 6: Tamaki Kawazoe and the Tardy Braver
After Tamaki’s match, which ended in a victory for her, the other matches take place while she prepares to participate in the last match too. At the end, the Muroe High Kendo Club ends winning with three wins, one loss, and one tie against the Machido High Kendo club.

Episode 7: Sushi and Mince Meat Cutlets
This episode picks up at the end of the previous one, starting with Ishibashi revealing that he knew the fifth fighter, Bureiba, was actually Tamaki. His challenge to Tamaki is accepted and so their match starts

Episode 8: Tama and Part-Time Work
Tama sees an anime package on TV that she wants but later finds out that she does not have enough money for it. At the kendo dojo, Tamaki overhears Miyako on the phone talking about how she could not work part-time that day.

Episode 9: Kojiro and the Crossroads of Fate
Tamaki nears the ends of her part time-job filling in for Miyako, while the other club member is practicing at the kendo dojo. Tamaki’s father still ponders if Tamaki will buy him a gift for his birthday.

Episode 10: Miyako Miyazaki’s Melancholy and the First Tournament
Toraji meets with his parents and helps his mom working at a store. He receives his paycheck. Tamaki finishes up her job and receives her paycheck as well. The Muroe High Kendo club enters the high school tournament.

Episode 11: Animation and Dreams
Miyako reveals to the other kendo club members that Reimi has been harassing her because during middle school she refused to go out with the captain of the men’s football team, whom Reimi had already been rejected by.

Episode 12: Azuma and Mei’s Circumstances
This episode dedicates to Satori Azuma from Monroe High School and Mei Ogawa from Seimei High School. Mei joined the Seimei High Kendo club to get along with her friends, but many of her friends quit the club as they couldn’t take the teacher’s strict training.

Episode 14: Satorin’s Resolve and Nomming
Kirino and Sayako continue their attempts to persuade Azuma to join the kendo club. Their attempts end only in tears as they run through and around the school, Miyako hears their mobile lamentation and springs into action.

Episode 15: First Training Camp and Public Bath
It’s training camp at the Muroe High kendo club, jointly with the Machido High Kendo club that they had a practice match with. Tamaki’s father sneaks around worried about the boys while the group cleans up the pool, fights over who gets to train with Tamaki and takes a break at the bathhouse.

Episode 16: Kirino’s Absence and the Preliminary Tournament
The Muroe High Kendo club faces against the Tozyo High Kendo club. Kirino is worried by home troubles while the rest of the team worries about her. However, Sayako sharing a deep connection with Kirino who is prepared to step up for the win and ease Kirino’s burden.

Episode 17: Light and Shadow
The tournament continues, with Tamaki seemingly in trouble with the other team’s treacherous plots. Konishi, a girl from the Tozyo High kendo club, purposedly causes Tamaki to trip over tennis balls, inflicting an injury on her foot.

Episode 18: The Tournament and Muroe High After That
Toraji and Tamaki have a little talk and wounds are tended to. Since Tamaki and Konishi were both badly injured from their match, Kirino, from the Muroe High kendo club, and Aoki, from the Tozyo High Kendo club, participate in a representative match.

Episode 19: The Armadillo and the Pangolin
Toraji takes Tamaki to the hospital while the other members of the Muroe High kendo club practice match with each other. However, Miyako’s sword breaks, so Miyako and Eiga go shopping for a new bamboo sword at the kendo store.

Episode 20: Braver and Shinaider
Toraji gives the Muroe High kendo club a vacation since he has a business trip to schedule. Yuji invites Tamaki to go to an amusement park that’s hosting a Blade Braver play. At the venue, she meets a girl called Rin Suzuki, a fan of Braver’s rival, Shinaider.

Episode 22: Winners and Losers
The Muroe High Kendo club goes to the Kanto High kendo tournament. Miyako shows her improvement in practice but fails to defeat Carrie in the tournament.

Episode 23: Lie and Silence
The principal of the school tells Toraji that the Muroe High kendo club will be disbanded because of club members engaging in suspicious or risky activities. It turns to be Toyama and Iwasa’s fault.

Episode 24: The Sword and the Way
The latter already give up when Kirino attempts and fails to prevent Tamaki from resigning from the Muroe High Kendo club. Azuma manages to convince Miyako to keep up with Kendo, while Sayako dissuades Kirino from quitting Kendo. Tamaki decides to learn upper-level posture to help improve her Kendo skills. Eventually, she decides to come back to Kendo club, and the members are reunited.

Episode 25: Kendo and What it Brings About
The Muroe High Kendo club goes to a national kendo competition and meets with many of their former opponents. Tamaki fights Rin again and wins by using the thrust attack.

Episode 26: “Since Then and “From Here on Out”
It is the new year and several months have passed since the national kendo competition. The Muroe High Kendo club later has a sparring match which causes the freshmen to become enthusiastic about joining the kendo club. At the very end of the episode, Tamaki encounters along a purple-haired woman with blue eyes, hinting that Bamboo Blade may have another season to come.

Anime Rating
8.0/10
497 users rated this.
Similar in these categories.