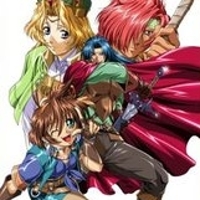 Rune Soldier (literally translated from Japanese as Magical Soldier Louie) is an anime and manga series based on the original novel series by Ryo Mizuno, which features soldier Louie as the hero. The series takes place on the continent of Alecrast on the world called Forcelia, and is related to the novel, anime, and manga series Sword World. It is a sibling series to Record of Lodoss War (which is also directed by Mizuno), taking place on a continent north of Lodoss Island.

Louie is a mage student of the mage academy, and adoptive son of the director. But still, he sucks at magic. Instead, he has abilities for drinking, flirting and fighting in taverns. One day, he meets a party of girls (a priestess, a warrior and a thief) looking for a mage to join them to open a ruin entrance, but they absolutely rejects him due to his pathetic magic skills. But he refuses to be rejected, and then he tries to join them by force, only to interrupting a sacred ritual of Melissa (the priestess), revealing Louie as her master. Now, as the will of god Miley says, they have no choice but to accept them, and here begins the whole new adventure for this “mage”. Louie, a brawny student at the mages guild, is reluctantly accepted by three girls (Merrill-thief, Genie-fighter, and Melissa-priestess) as a companion for their adventuring party. As the foursome explore ruins, battle dark creatures, and make new friends, they also uncover a sinister plot within the kingdom.

Anime Rating
8.0/10
250 users rated this.
Similar in these categories.