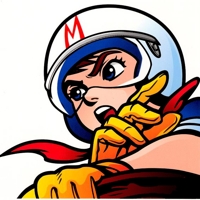 Originally titled “Mach Go Go Go”, the series was soon brought over to the United States and subbed into English as “Speed Racer”. It follows the adventures of a race car driver named Speed Racer, his girlfriend/spotter Trixie, his pit mechanic Sparky, his dad Pop, his mom Mom, his younger brother Spritle, and his pet monkey Chim-Chim. Speed competes in many races, often against villainous characters, and sometimes receives assistance from the mysterious Racer X. 1967. Tatsunoko Productions. 52 episodes.

Speed, along with the help of his friend and mechanic, Sparky, tune up and adjust the Mach 5 in preparation for the race, attaching a new windshield in the process. Unbeknownst to them, they had taken Pops’ windshield that concealed the plans for the new engine. Speed takes the windshield along to the race the next day. With the windshield, Speed unwittingly brought trouble towards him, for a corporate gang, who is after Pops’ revolutionary designs for the engine, sabotages the race, putting Speed in peril.

Speed, through his wit, realizes that Pops had hidden the plans on the windshield and fights hard to prevent the gang from stealing it. In a last minute effort to save his father’s hard work, Speed shatters the windshield with his helmet so that in effect, nobody walks away with the plans. With the gang out of the way, Speed finishes and wins the race…however, he does not win the prize money since officials had found out that the race was sabotaged by the corporate gang. A slightly disappointed Speed apologizes to a slightly frustrated Pops, who had found out that Speed had entered the race, for entering the race and destroying his plans. Pops tells Speed that the plans were always locked within his head, but still gets slightly enraged when Speed says he is going to enter more races. Speed, who is confident enough to ignore Pops, drives away into many different adventures that come towards him and his friends.

Anime Rating
7.9/10
331 users rated this.
Similar in these categories.