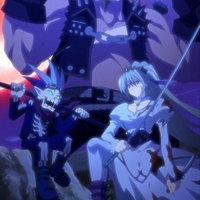 In the kingdom of Forland, a revolution and coup d’etat occurs, leading to the king’s death. In the last moments of his life, the King sends his only child, Princess Alita Forland to escape. Unfortunately, while fleeing, a life and death situation between Alita and the bloodthirsty bounty hunter Falis causes the two of them to switch bodies. Desperate for the safety of her Kingdom, Alita begs Falis to return and protect the Kingdom, offering herself as collateral. After a swift beating on the rebel forces, Falis resumes the title of Princess of Forland, leading to the birth of the most savage princess in their land, the “Murder Princess”.

Anime Rating
7.8/10
555 users rated this.
Similar in these categories.