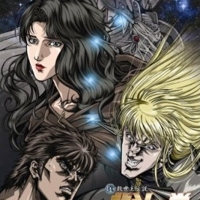 It is a Japanese animated film series produced by TMS Entertainment and North Stars Pictures based on the manga Fist of the North Star written by Buronson and illustrated by Tetsuo Hara. The films are an updated re-imagining of the original story narrated in the manga, including additional detail expanding of the story, modern artwork and animation, new characters, as well as minor alterations to some events. The series spans three theatrical films and two OVAs each focusing on a different set of chapters and main characters from the original story. These were released in Japan during a three year span between 2006 to 2008, culminating with the 25th anniversary of the original manga. The first film, as well as both OVAs, were distributed by Toho. A portion of the project’s budget came from a trust fund established by SMBC Friend Securities, which was raised over 23 billion yen.

Anime Rating
8.4/10
155 users rated this.
Similar in these categories.