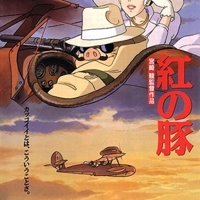 A dashing and brave WWI Pilot is transformed into a pig by a mysterious curse. He is now employed as a paid mercenary/problem solver and sea plane pilot in the Adriatic Sea for the side of good. He is forced to do combat with a band of air pirates who never bathe and call themselves Mama Aiuto (Mothers Helper). Anarchy and war are coming to Italy and the adriatic pilots are being forced to join the Air Force or become fugatives from the law. Our hero Porco is shot down in a dogfight with a self styled air ace called Curtis.

Porco must rebuild his plane, Fight Mama Aiuto, run from the Italian government, engage in a final showdown with Curtis whilst courting the lovely Gina and saving young school girls from the clutches of Mama Aiuto, pay back Papa Piccolo for the renovation of his airplane, win a bet, break the curse, and save himself in the bargain.

Anime Rating
8.5/10
110 users rated this.
Similar in these categories.