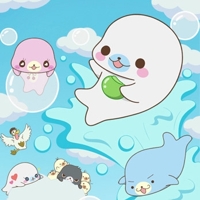 The story is about Mameta, a handsized Mamegoma. Mamegoma are several unusual Japanese toy characters that were created by the San-X company, they are tiny seals available in a variety of different colors. Mamegoma means “bean seal” (the prefix “mame,” meaning “bean” in Japanese, is a prefix used to refer to miniature versions of things.

The grade schooler Akane lives next to a beach in her house, which is also a Toufu Shop. Akane lives with her kind parents and her energetic younger sister Yui and makes new experiences every day together with her friend Mameta. She’s also making friends with lots of other Mamegoma from the Mamegoma Shop in town, like with the cute Cherry-chan or Harikiri-san’s Soda-kun. Akane’s parent’s Toufu Shop also has a resident duck who’s called Takayaso and is liked by Akane and the various Mamegoma.

Anime Rating
8.3/10
16 users rated this.
Similar in these categories.