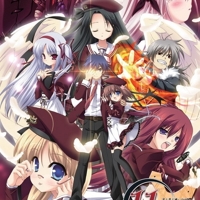 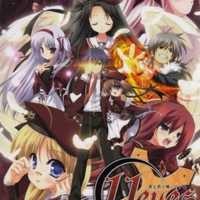 Following the suicide of his sister, Satsuki Kakeru had lost interest with his own life. He might have never freed himself from the grief if not for his childhood friend, Minase Yuka. One night while both of them were out on a walk, the sky suddenly turns blood red, the moon pitch black. Even more strange, the people around them have disappeared, and hellish creatures begin to roam the streets. After a brief period of hiding, everything returned to normal. Unsure of what had happened, the two boys dismiss the event as nothing but a dream.

Much to their dismay, the Red Night occurs again. However, this time, Kakeru and Yuka meet several people who are also affected by this strange phenomenon: Kusakabe Misuzu, a red-haired onmyouji swordswoman; Tachibana Kukuri, a peculiar mute girl who strangely resembles Kakeru’s deceased sister; Hirohara Yukiko, a lively young girl who takes on the personality of a cold killer when her glasses are removed; and Tajima Takahisa, a young pyrokineticist with a heated attitude to boot.

Aside from the fearsome monsters, six shadows who call themselves the Black Knights desire to kill Kakeru and his companions. With nothing but themselves, Kakeru and his newfound friends must now work together in order to survive and end the Red Night.

11eyes is an anime adaptation of the adult visual novel entitled “11eyes: Sin, Damnation, and the Atonement Girl” developed by Lass. Produced by studio Dogakobo, the anime series aired a total of 12 episodes (plus an OVA) between October 6, 2009 and December 22, 2009.

Episode 1: Red Night
After witnessing his own sister’s suicide, Satsuki Kakeru lost his interest for life and lived his childhood years in an orphanage. There, he meets Minase Yuka, a girl who helped him overcome his grief and sorrow. Eventually, Kakeru learns to be happy again, and attends Rainbow High with Yuka. One night, the sky suddenly turns red and the moons turns black. People around them have disappeared, and hellish creatures start to hunt them. Fortunately, everything suddenly returns to normal, leaving Kakeru and Yuka in a state of shock and confusion. The following day, Kakeru reflects on how Yuka had always stood up for him. He then makes a vow to protect her, should the Red Night ever occur again.

Episode 3: The Lonely Pride
Initially refusing to train Kakeru, Misuzu eventually agrees after seeing his determination to protect Yuka. Sooner than expected, they are taken to the Red Night again, and Misuzu is now engaged in a fight against Gula, one of the Dark Knights. With a help from an unknown girl, Misuzu manages to kill her opponent. Following Gula’s death, one of the crystal towers in the Red Night disappear.

Episode 4: Smiling Behind a Facade
Takahisa and Yukiko join Kakeru’s group, as they are also affected by the Red Night. Takahisa has the ability to manipulate fire, a fact that encourages Kakeru to find his own. The following day, they are once again taken to the Red Night. Ira and Invidia, members of the Black Knights, engage Misuzu in battle. Yukiko reveals her abilities and defeats their opponents together with Misuzu. Once again, they escape the Red Night.

Episode 5: For My Friends and For Tomorrow
Kakeru and Yuka meet Kukuri Tachibana, a mute girl who strongly resembles Kakeru’s sister. Later, the Red Night returns, and with it is Ira and Invidia. While Invidia holds Misuzu in battle, Ira goes to Kakeru and Yuka to attack them. This causes Kakeru’s powers to awaken, the ability to predict his opponent’s movements.

Episode 6: Upset Heart
After his battle with Ira, Kakeru falls into a coma. Misuzu helps him heal, but the process exhausts her, and passes out on Kakeru’s lap. The next morning, Yuka arrives and misinterprets Kakeru and Misuzu’s relationship. Kakeru then assures Yuka that he and Misuzu are only friends. Yuka confesses her love for Kakeru, and attempts to kiss him. However, Kakeru refused, prompting Yuka to run away. Before he could catch up to Yuka, the Red Night falls again. Kukuri reveals her powers and wipes out their opponents.

Episode 7: Twisted Awakening
Aravitia, chief of the Black Knights, discovers that Lisette was trying to escape. He then leaves the Fragments in the hands of his Black Knights. In the heat of battle, Yuka awakens her power of nullification.

Episode 8: Witching Hour
Kakeru receives the power of the Kusakabe from Misuzu by drinking her blood. This grants him powers similar to Misuzu, which synergizes well with his own ability.

Episode 9: Breaking Bonds
Superbia uses Saeko as a leverage, causing Takahisa to go on a rampage. Takahisa has no idea that he is fighting a clone, and that the real Superbia is fighting Misuzu. The other Fragments arrive to aid Misuzu in battle, and Superbia retreats. Later, Yukiko reveals that she had killed Takahisa.

Episode 10: The Witch Awakens
Shiori reveals to Kakeru and Yuka what the Red Night and the Black Knights are. It is revealed that each of them possess a fragment of Liselotte’s soul, a wicked witch who desires to destroy the world. Shiori is interrupted when the Red Night befalls them again. Yukiko, lusting for revenge over Takahisa’s death, mindlessly engages the Black Knights alone, and is killed by Misao. Her fragment is taken, disabling her ability to regenerate. Later, Lisolette reawakens.

Episode 11: The Choice called Destruction
Lisellote regains her dark powers after absorbing Yuka’s and Yukiko’s fragments. The Black Knights aid to stop Lisellote, and transport Misuzu and Kakeru out of the Red Night. Misao appears before Kakeru and Misuzu, informing them that Avarita and Abraxus were killed, and Shiori had commited suicide. Lisellote also kills Kakeru and Misuzu, and finally regains all of her fragmented soul.

Episode 12: Daybreak of the Dark Night
It is revealed that the events after Lisellote’s awakening were just a foresight by Kakeru’s eye. To prevent what he had seen from happening, he decides to kill himself so that Lisellote will not obtain the Eye of Aeon. However, Yuka nullifies Kakeru’s sword, preventing him from hurting himself. The Fragments then make a final stand against their most powerful adversary, Lisellote.