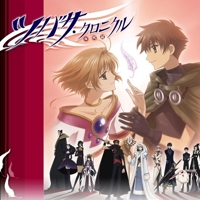 During an excavation at a mysterious ruin within the Clow Kingdom, young archeologist Syaoran is surprised by the presence of his childhood friend and Clow’s princess, Sakura. She appears with wings, which disintegrates and takes her memories with it.

Syaoran asks the Dimension Witch for help, and discovers that Sakura’s memories have taken the form of feathers, which were then scattered throughout different dimensions. In exchange for the ability to travel through dimensions, they must offer the thing they value most.

Now it is up to Syaoran, and his newfound allies: Kurogane, Fai D. Flowright, and Mokona, to travel through different dimensions and retrieve Sakura’s memories.

Tsubasa Chronicle is an anime adaptation of the fantasy-romance manga series entitled Tsubasa: Reservoir Chronicle, which was written and illustrated by the manga artists group Clamp. Produced by studio Bee Train under the direction of Kouchi Mashimo and Hiroshi Morioka, Tsubasa Chronicle aired a total of 52 episodes over 2 seasons, between April 9, 2005 and November 4, 2006. 5 OVAs were also released between November 16, 2007 and May 15, 2009.

Episode 1: Destinies Converge
Sakura visits Syaoran while excavating at a mysterious ruin. There, an unknown force draws her into a wall, and causes her memories to manifest into feathers. After Syaoran pulls her into safety, the feathers disperse into different dimensions.

Episode 2: The Power to Fight
Syaoran, Kurogane, and Fai asks the Dimensional Witch Yuuko Ichihara to grant their wishes. Syaoran wishes to retrieve Sakura’s lost memories; Kurogane wishes to return to his home world; while Fai wishes to travel other worlds to avoid his king.

Episode 3: Sword of Demon Destruction
After receiving the power to travel dimensions, the trio find themselves involved in a gang war at Hanshin Republic.

Episode 4: Innocent Wandering
Sakura wanders off and crosses paths with the gang leader Kunio. Despite initially planning to use her as a leverage, Kunio decides to disband his gang after being moved by Sakura’s kindness.

Episode 5: The Battle of the Mage
The group hypothesizes that one of Sakura’s feathers is contained within a powerful Kudan. Later, Primera challenges Fai to a fight.

Episode 6: Unshed Tears
Syaoran and Shougo are engaged in battle against each other. Later, they learn that their suspicion is true, and one of Sakura’s feather lie within Masayoshi’s Kudan.

Episode 7: The Broken Memento
The group arrives on a new world, at Koryo Country. They discover that the area is being constantly disturbed by Ryanban and his minions.

Episode 8: God’s Beloved Daughter
Sakura is drawn towards the Ryanban castle and mysteriously disappears. Syaoran immediately goes after her, and discovers that several townspeople have been turned into monsters. Later, the villagers decide to fight once more.

Episode 9: Princess of Shadows
Ryanban’s secret weapon is revealed. They are aided by a powerful witch named Kiishimu. Meanwhile, Syaoran is determined to retrieve Sakura’s feather inside the castle despite his injuries.

Episode 10: Mirror of Separation
The villagers of Koryo storm the castle. Meanwhile, Syaoran fights Ryanban’s son, while Fai and Kurogane are fighting the witch Kiishimu. Later, Kurogane accidentally releases Kiishimu from her imprisonment.

Episode 11: The Chosen Tomorrow
The villagers end up under the control of Ryanban, after a failed attack. To make matters worse, Chu’nyan and Sakura are now being used as leverage against Syaoran.

Episode 12: The Warm Smile
The group moves on to another world, but finds no people or buildings. Sakura and Syaoran reminiscences the past memories they have of each other. After learning that there are no feathers in this world, the group moves on.

Episode 13: Advocate of Illusions
The group arrives in a new world, at Jade Country. Shortly after their arrival, they learn of an old legend about a golden-haired princess who possessed a feather with magical powers.

Episode 14: Truth in History
Sakura disappears together with the abducted children. Meanwhile, Syaoran is worried and asks Doctor Kyle to help him find Sakura.

Episode 15: A Heart that Believes
With Princess Emeraude’s help, Sakura attempts to escape the forbidden castle along with the children. Meanwhile, Syaoran and the townspeople force Dr. Kyle to confess his crimes.

Episode 16: Strength and Kindness
The group arrives in a new world, Storm Country. Syaoran wins a tournament, but is later challenged by Keefer, who needs the item Syaoran won from the tournament.

Episode 17: Demon Hunters
The group arrives in Outo Country, and is greeted by a welcoming party. Later that night, Syaoran defeats an Oni who attacked them, but gets injured in the process.

Episode 18: Cat and Dog
Kurogane and Fai discover that Syaoran is blind in his right eye. Later, while investigating about the strange Oni that constantly attacks them, Kurogane and Fai are attacked.

Episode 19: Living Resolve
Kurogane and Fai finish off the Oni that attacked them. Later, Syaoran asks Kurogane to teach him about swordsmanship.

Episode 20: The Afternoon Piano
Syaoran and Kurogane set out to buy new weapons. Syaoran gets a sword called Hien (Scarlet Flame); while Kurogane gets a longsword called Souhi (Blue Ice).

Episode 21: The Imp’s True Face
Syaoran continues his training under the supervision of Kurogane. Later, they discover a hunting Oni, who reveals himself to be Seishirou.

Episode 22: The Indelible Memory
Syaoran remembers that Seishirou was the one who trained him how to fight. Later, they discover that the strongest Oni takes the form of a human.

Episode 23: The Vanishing Life
Seishiro attacks Fai and defeats him. Later, Syaoran gets stabbed in the chest with an Oni weapon by Seishiro.

Episode 24: The Blade of a Desperate Fight
Syaoran, Fai, and Sakura wakes up and discovers that they were only playing a virtual reality game at Edonis Country. However, someone desires to make this game into reality.

Episode 25: The Ultimate Game
The fight between Syaoran’s group and the Oni continues. Later, Syaoran faces Seishirou in battle with his new weapon.

Episode 26: The Last Wish
The group arrives at Tsarastora Country. Later, a god offers to grant a wish to the person who successfully climbs his temple.