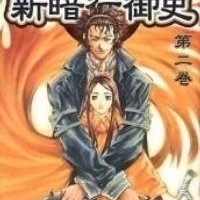 Shin Angyo Onshi takes place in the land of Jushin, modeled after feudal Korea. In Jushin, there once lived secret government agents called the amen osa (or angy? onshi in the Japanese version), who traveled the countryside in disguise. They were charged by the king with finding and punishing corrupt government officials, and bringing justice to the country’s citizens.

At the start of the series, Jushin has been destroyed, fractured into numerous fiefdoms and kingdoms, many of which are ruled by corrupt and tyrannical warlords. The story follows the adventures of one of the remaining amen osa, Munsu, as he continues to wander the countryside and deals with the chaos caused by Jushin’s fall. It becomes apparent as the series progresses that Munsu’s travels are not random. In truth, Munsu is searching for the man responsible for assassinating his best friend, the king of Jushin, an act that led to the fall of the country.

But as Munsu grows closer to reaching his goal, he encounters old friends and comrades from his past, some who have since switched their allegiance to his enemy. Through them, it is revealed that Munsu was not always an amen osa. In addition the series also uses the exploits of Munsu and his companions to retell various Korean folk stories, including using Chun Hyang as one of the main character.It’s an Fantasy/Action Adventure(ST to Wikipedia, go there for more info.)